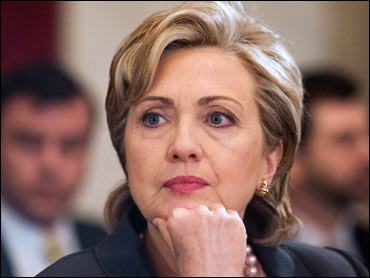 When Hillary Clinton began her run for U.S. Senate in 1999, she embarked on a "a statewide listening tour," for which she trudged through every county of New York State, visiting with small groups and paying particular attention to conservative upstate regions.

Seven years later, Clinton is trying her old routine, but with a cyber twist. In the era of Web 2.0, meet Hillary 2.0.

Instead of rural town hall campaigning, Clinton is meeting voters in online video chats, from the comfort of a living room — or at least a pretty convincing staged couch-and-computer setup — for "conversations," in which viewers can type out and submit questions.

Through video streamed on her Web site, for a half-hour Clinton answered about a dozen queries on each of three evenings this week. Questions ranged from "What is your favorite movie?" (from Jean in New Jersey) to "Do you plan on ending our dependence on foreign oil?" (Linda in Pensacola, Fla.).

"Well, Linda, I do!" Clinton said into the camera, explaining she thinks the United States will be better able to deal with threats of terrorists once it is not funding them. She talked about alternative energy ("I like to call it 'smart' energy") and stressed ethanol. But really, the answer was "probably longer and more wonkish than I can explain in one little Web chat," she said.

Despite the Web's limitations, Clinton's staff is banking that in an era of MySpace and YouTube, voters feel comfortable watching streaming video, receiving campaign e-mail updates and reading blogs to learn candidates' positions on issues.

Clinton entered the presidential race by posting a Web video. And to run its Web operation, her campaign scooped up at least four political bloggers, including Peter Daou, who worked on Sen. John Kerry's 2004 presidential campaign and blogs for Salon and the Huffington Post.

"Internet and technology has become an integral part of politics, and it is a great way for Sen. Clinton to have a conversation with people," Daou, the campaign's Internet director, told CBSNews.com producer Christine Lagorio. "It is a wonderful democratic medium that allows people to connect with each other and with the campaign."

The Hillary for President blog is still getting up and running, pending the end of a contest to "write the very first guest post." According to Daou, thousands of submissions have been received.

Thousands of responses to an online query is just the beginning. Ask political bloggers or staffers of previous "wired" campaigns, and they predict a much broader e-campaign horizon.

Howard Dean's campaign for the Democratic nomination in 2004, run by Joe Trippi, is cited as the prototypical Web-savvy campaign. The Internet — remember Meetup.com and the coining of "netroots?" — fueled that initial surge of support for Dean. In the end, all the net hype was deflated by the Dean scream and a flurry of mainstream media (MSM in Web lingo) commentary.

Trippi cites numbers. If in 2000 Sen. John McCain raised a couple million dollars with an Internet campaign, and Dean raised $59 million four years later, he predicts the top Internet candidates will pull in half a billion before the election.

"Whatever records we set in terms of people involved and money and those things, they will just be shattered by multiple candidates in 2008," Trippi said.

Bloggers are playing an increasingly significant role in presidential campaigns. Clinton has plucked Daou, along with Crystal Patterson (from DailyKos), Jesse Berney (who ran DNC blog operations in 2004) and Judd Legum (of Think Progress).

The other candidates have also "staked out their turf already," according to Taegan Goddard, publisher of PoliticalWire, an online politics news site.

Amid such hiring, Daou said there is a lot of discussion about bloggers — some formerly independent news sources — becoming part of the establishment.

"There are more and more campaigns and organizations reaching out to people who have blogged before, and I think you're going to see some cross-pollination," he said.

Trippi said blogs are one of the only places campaigns can go to find Web-savvy political wonks who also know the ins-and-outs of the media.

"We are still pioneers here — we are still in the first wagons going across the prairies," he said. "So the only people who were out there on the frontier are the bloggers."

In addition to making them job offers, the campaigns — particularly Clinton's and Edwards' — have been reaching out to blogs like MyDD, PoliticalWire and DailyKos for months to establish communications and send news tips.

"Her biggest challenge is to prove to people that she is electable. By appealing across a broad spectrum and reaching across a wide swath of the Internet, she is trying to prove that," Goddard said.

Playing Nice with the MSM

According to a December 2006 Pew study, 70 percent of adults use the Internet, which makes 30 percent of potential voters — or donors — who will never see an e-mail from Clinton or read her campaign blog. Add to that percentage a quarter of Internet users who don't have broadband and won't watch streamed videos.

"(The Internet) is not a replacement," Daou said. "The senator will still be going person to person to meet as many people as possible. I see it as an augmentation."

To cover the media bases, she's also doing as much TV as seems humanly possible: Clinton appeared on several morning shows and every network for an evening news broadcast in the days following her announcement of launching a presidential exploratory committee.

"She's actually executing two communications strategies at the same time," Goddard said. While posturing herself on TV as the go-to Democrat opposing Mr. Bush's Iraq strategy, "she's also trying to get the hard core political junkies, and the best way to get those people is not to go on the evening news. It is to go online."

But experts say (and as most frequent social-networking site users know), portraying oneself online is a lot different than in person. Politicians still seem to be ironing out their online personas.

After her Monday evening online question-and-answer session, Clinton got critiqued for seeming too rigid and dry (though she did profess her love for the film "Out of Africa").

David Weinberger, a fellow at Harvard's Berkman Center who has worked on political campaigns, said Clinton is simply using the new medium to get her message out in her traditional way.

"Her way is a very formal, polished TV type of way," Weinberger said. "That's trying to make the Internet the TV. We are far more interested in imperfection online."

By Wednesday evening, Clinton was making larger gestures, scratching her face, coughing and — make yourself at home — pouring herself a glass of water.

So far, the Web activity of '08 candidates has stuck to low-cost self-promotion. But watch for publicity offensives to turn muddy as months pass. Just ask former Sen. George Allen, whose "macaca" comment was caught on tape and posted online by his competitor, Sen. James Webb, D-Va.

"Video and audio are going to be seen a lot more," Goddard said. "These candidates are going to have to be, even when they're in a room with 12 people, aware that they might be speaking to everyone."

Trippi calls this the power of "gotcha," as in "you weren't paying attention, but my (video-equipped) cell phone was."
By Christine Lagorio