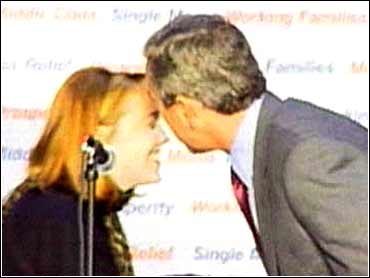 You don't even have to belong to the Republican Party to introduce George W. Bush at the GOP convention this week.

Kim Jennings, a 26-year-old single mother who will address the convention on Wednesday night, is a registered voter, but not a member of either party.

Jennings, of Rogers, Ark., works full time in computer and administrative support at a bank, while pursuing a bachelor's degree and raising a 6-year-old daughter.

She is Exhibit A for Bush's tax cut.

With an annual income of $20,000 to $25,000, she represents a class of voters who Bush says would benefit from his promised trillion dollar-plus tax cut.

Jennings is one of several "real people" (that is nonpoliticians) who will address the convention as part of the Bush campaign's effort to make the GOP more inclusive.

Her appearance on the convention under card should help toward that goal, since 41 percent of convention delegates earn more than $100,000 a year, and a quarter say they're worth at least $1 million.

Jennings, who thinks welfare sometimes "creates a dependency," says she was turned down for public assistance when she wanted to go to school full time. "I never made low enough to get anything, but never enough to make ends meet, so I worked a second job."

"I had to work really hard to get where I am right now," she says. "It would have helped a lot to have a little more money."

According to the Bush campaign Web site's tax calculator, she would get a $1,000 tax cut under the Texas governor's tax plan.

"I am not a strongly political person," says Jennings, who would not discuss how she voted in the last presidential election. She says she has never been any kind of political activist.

She first became involved with the Bush campaign in April, when the governor visited Bentonville, Ark., in solidly Republican Benton County. A Benton County Single Parent scholarship winner, Jennings was recruited to introduce Bush. When they met in Bentonville, she spoke with Bush and found him "sincere" and "very down to earth."

Since then she's researched Bush and Gore by reading their campaign Web sites and following media coverage, which she regards with some skepticism ("no offense"). Jennings is focusing on the two issues she cares about most: taxes and abortion.

"With a tax cut, it's a feel-good (thing)," says Jennings. "You see more of the money that you make, and you're going to be inspired to work more to make a little more."

On abortion, Bush represents her position better than Al Gore, she says.

"I am not a real strong supporter of abortion," she says. "I have always said I would never do it. But should we take it away from all women? That's a really tough question. There could be reasons for exceptions (in cases of) incest, rape, the health of the mother; they should hav a choice. I don't necessarily agree with it, but I don't think they should have the choice taken from them."

An economics class she took at college brought her around on Bush's Social Security plan, which would allow taxpayers to invest 2 percent of their benefit in low-risk equities.

"Originally, I think markets sort of scared me a little. I don't have the extra money to invest! But a lot of what Bush has said goes right along with what I learned" in class, she says.

Jennings, whose daughter attends a charter school, "loves" Bush's Texas education record, and was unaware of Gore's recent attacks on the Texan's record on health care, child poverty and the environment.

She admits the prospect of addressing thousands of delegates is "kind of intimidating." Jennings began work on her short speech the week before last, with support from speechwriter Rick May.

Asked if she has any political heroes, Jennings jokes, "I think Martin Sheen does really good on his TV show!" For the unitiated, Sheen portrays a Clinton-like Democratic president on The West Wing, the prime-time TV drama.