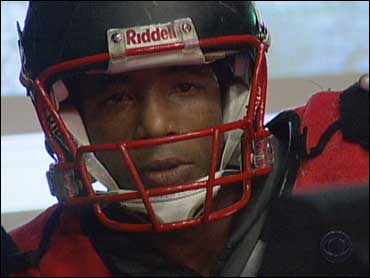 One man who dreams of being a Super Bowl champion plays on the virtual football field of Madden NFL 2008. He's all-pro, thanks to the magic of computer graphics, reports CBS News correspondent Richard Schlesinger.

If you're one of the millions of who play the Madden NFL 2008 video game, you know Kenny Bell.

He's everywhere in the game.

When Kenny Bell suits up, he's set up for a peculiar game of football. Studded with reflectors, he steps in front of an audience of 54 infra-red cameras that record his every move on a computer.

On every snap, he mimics the slants, stutters, and celebrations of some of the grid iron's greatest.

"I turn into Reggie Bush, LaDainian Tomlinson, Santana Moss," he says. "It's a real skill. It's a talent."

It's his own kind of fantasy football - virtually real but not quite reality. He knows all the right moves, even though they're not his.

How many different ways are there to catch a ball?

"It's a lot of different ways to catch a ball," Bell says. "Sometimes you have to kind of defy the laws of gravity and nature to do some of these moves."

Just like the real stars, Kenny Bell has an agent, his old high school coach, John Nielson, who represents virtually all of the actors like Kenny.

"Could I be a good football player in the video world?" Schlesinger asks Nielson.

"You'd make a good tackling dummy if you just stand and let one of my guys come and just rip your head off," Nielson says.

In the real world, Kenny is an assistant coach at Servite High School in Anaheim, California. But in his own perfect world, Bell would be on a real NFL team, lining up against real NFL players.

"I had a few workouts. I worked out for Buffalo, for Jacksonville and for Tennessee," Bell says. "I guess my timing just wasn't right."

Kenny Bell may not have made it to the NFL yet. But he still has a huge audience. Since he started playing on this field, under these lights, roughly 10 million copies of the game have been sold. That's enough fans to fill every stadium in America several times over.

"Nobody knows me," Bell says. "You know, nobody knows the man behind the mask."

The man behind the moves is the most famous man you've never seen.

Bells sums it up: "Just another day at the office, I guess you could say."