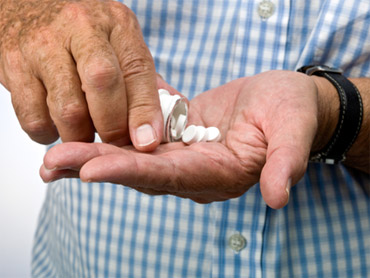 Federal agents arrested about 30 suspects in three states Tuesday in a major crackdown on Medicare fraud totaling $61 million in separate scams as the government targets waste in taxpayer-funded health care.

Arrests in Miami, Brooklyn and Detroit included a Florida doctor who allegedly ran a $40 million home health care scheme, including falsely listing patients as blind diabetics so that he could bill for twice-daily nurse visits, officials from the U.S. Department of Justice and U.S. Department of Health and Human Services said.

Those arrested included one Miami doctor, Fred Dweck, and about 14 people who worked with him, including nurses.

A federal indictment alleged that Dweck ran a scam to tap a Medicare program that pays very high rates to care for the sickest patients. Dweck referred about 1,279 Medicare beneficiaries for expensive and unnecessary home health and therapy services, bribing the owners of two Miami clinics to join the scam. He also faked medical certifications, according to the indictment.

A telephone listing for Dweck could not be found and it was unclear if he had a lawyer.

The raids come a week after a report that Miami-Dade County received more than half a billion dollars from Medicare in home health care payments intended for the sickest patients in 2008, which is more than the rest of the country combined, according to a report by the Department of Health and Human Services' Office of Inspector General. Medicare paid the county about $520 million, even though only 2 percent of those patients receiving home health care live here.

Tuesday's arrests mean a Medicare Fraud strike force formed by the Justice and Health Departments has charged suspects accused of bilking Medicare of more than $1 billion, with about 20 prosecutions in less than two years. The pilot strike force, which started in Miami in 2007, has indicted more than 460 suspects in Medicare fraud scams. The program is now in Los Angeles, Houston and Detroit.

Cleaning up an estimated $60 billion a year in Medicare fraud will be key to President Barack Obama's proposed health care overhaul. HHS and DOJ have promised more money and manpower to fight the fraud.