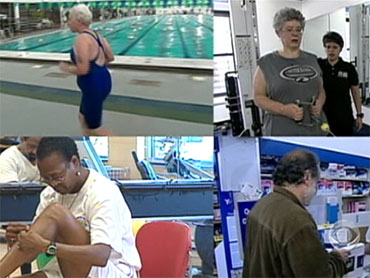 WASHINGTON - The coming year is a big one for President George W. Bush, President Clinton and for millions of others born in 1946, the start of the post-war baby boom.

That makes them eligible for Medicare, with huge implications for our future, CBS News Correspondent Sharyl Attkisson reports.

On New Year's Day, the first baby boomers will celebrate the big 6-5, and they're not just getting older. They're getting more costly.

"The retirement of the baby boom generation will bring a tsunami of spending that will cause a severe problem for the federal government's budget over time," said David Walker, former U.S. comptroller general and CEO of the Comeback America Initiative.

Take Medicare, health care for the elderly and disabled:

• The number of people eligible will nearly double from 46 million to 80 million by the time all the boomers reach 65.
• It's estimated the cost will grow from $500 billion a year today to $929 billion by 2020.
• The number of workers supporting each senior will fall.

"Ultimately we're going to have to make tough choices about how much health care can we afford and sustain and how are we going to change our payment systems to make sure that it doesn't bankrupt the country," said Walker. "Because if there's one thing that could bankrupt the United States, it's out-of-control health care costs."

Medicare is already underfunded by at least $23 trillion. That's the difference between the benefits promised and the taxes actually being paid into Medicare. It could go bankrupt as early as 2017. Yet Americans still, apparently, want it all. According to a new Associated Press/GfK poll, they don't want to raise the age for Medicare.

Sixty-one percent favor raising Medicare taxes to avoid cutting Medicare benefits, and a majority of both Democrats and Republicans, young and old, would rather raise taxes than cut benefits.

The health care town hall meetings gave a glimpse into how Americans react when they think their benefits might be cut.

To save the system, fiscal watchdogs insist Americans will ultimately have to work longer and get used to less government help. The question is not if change will have to be made but when politicians choose to make them.