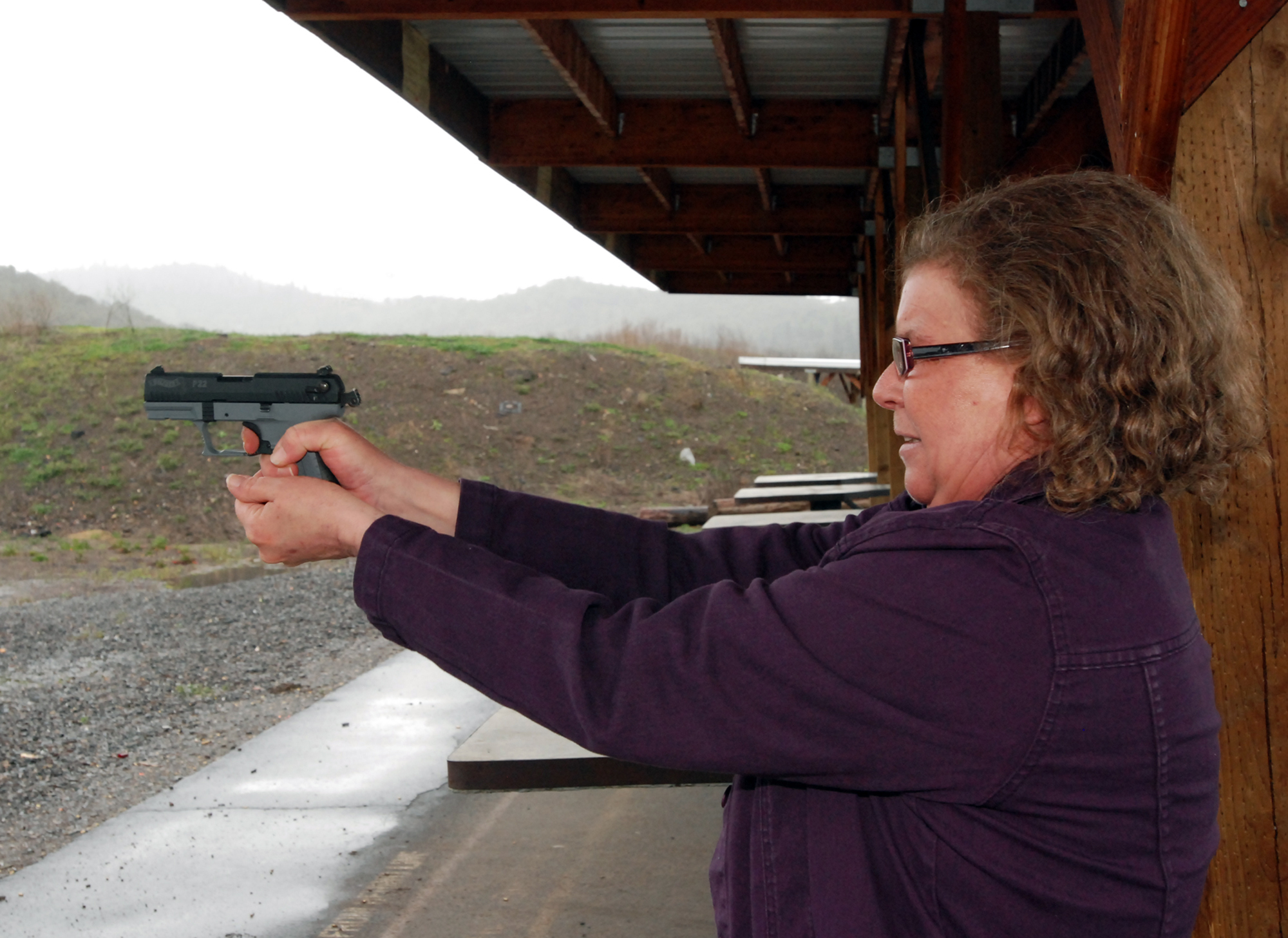 WHITE CITY, Ore. - Cynthia Willis calls up and down the firing range to be sure everyone knows she is shooting, squares up in a two-handed stance with her Walther P-22 automatic pistol and fires off a clip in rapid succession.

Willis is not only packing a concealed handgun permit in her wallet, she also has a medical marijuana card. That combination has led the local sheriff to try to take her gun permit away.

She is part of what is considered the first major court case in the country to consider whether guns and marijuana can legally mix. The sheriffs of Washington and Jackson counties say no. But Willis and three co-plaintiffs have won in state court twice, with the state's rights to regulate concealed weapons trumping federal gun control law in each decision.

With briefs filed and arguments made, they are now waiting for the Oregon Supreme Court to rule.

When it's over, the diminutive 54-year-old plans to still be eating marijuana cookies to deal with her arthritis pain and muscle spasms, and carrying her pistol.

"Under the medical marijuana law, I am supposed to be treated as any other citizen in this state," she said. "If people don't stand up for their little rights, all their big rights will be gone."

A retired school bus driver, Willis volunteers at a Medford smoke shop that helps medical marijuana patients find growers, and teaches how to get the most medical benefit out of the pound-and-a-half of pot that card carriers are allowed to possess. She believes that her marijuana oils, cookies and joints should be treated no differently than any other prescribed medicines. She said she doesn't use them when she plans to drive, or carry her gun.

"That's as stupid as mixing alcohol and weapons,"' she said.

Oregon sheriffs are not happy about the state's medical marijuana law.

"The whole medical marijuana issue is a concern to sheriffs across the country who are involved in it mainly because there is so much potential for abuse or for misuse and as a cover for organized criminal activity," said Washington County Sheriff Rob Gordon, who became part of the Willis case because his office turned down three medical marijuana patients in the Portland suburbs for concealed handgun permits. "You can't argue that people aren't misusing that statute in Oregon.

"Not everybody, of course. Some have real medical reasons. But ...the larger group happens be people who are very clearly abusing it."

The sheriffs argue that the 1968 U.S. Gun Control Act prohibits selling firearms to drug addicts, and they say that includes medical marijuana card holders. Their briefs state that they cannot give a permit to carry a gun to someone prohibited from buying or owning a gun.

But the cardholders have won so far arguing this is one situation where federal law does not trump state law, because the concealed handgun license just gives a person a legal defense if they are arrested, not a right.

Oregon's attorney general has sided with the marijuana cardholders, arguing that the concealed handgun license cannot be used to buy a gun, so sheriffs who issue one to a marijuana card holder are not in violation of the federal law.

Willis' lawyer, Leland Berger, says it is much simpler.

The sheriffs "are opposed to the medical marijuana act," Berger said from Portland. "It's not based on reason. That's how they are."

Rural southern Oregon is awash with marijuana — legal and illegal. Arrests for illegal plantations are commonplace. The region's six counties also have the highest rate of medical marijuana use in the state. There are also a lot of guns in the Rogue Valley, where Willis lives.

Sixteen states now have medical marijuana laws, according to NORML, an advocacy group. There is no way to determine how many medical marijuana cardholders also have gun permits. Patient lists are confidential, and an Oregon court ruled the sheriffs can't look at them.

NORML executive director Allen St. Pierre said Oregon courts have not been entirely medical marijuana friendly. While they have upheld the right to pack a pistol, they have also ruled that employers can fire people who use medical marijuana.

"A person who uses medical cannabis should not have to give up their fundamental rights as enumerated by the Constitution,"' St. Pierre said.

Gordon said he expects the gun issue to come up in other states with medical marijuana laws.

Oregon was the first state in the country to decriminalize small amounts of marijuana, with legislation enacted in 1973. And it was right behind California in making medical marijuana legal when voters approved a ballot measure in 1998. But voters here stopped short of following California all the way to selling medical marijuana to cardholders at dispensaries. A ballot measure failed last year, so patients still have to grow their own or get someone else to grow it for them at cost, with no profit margin.

Oregon is one of 37 states where the sheriff has to give a concealed handgun permit to anyone meeting the list of criteria, though they have some discretion to say what those criteria are. They generally require people to be 21, a U.S. citizen, pass a gun safety course, and have no criminal record or history of mental illness, drug or alcohol abuse, or domestic violence.

The issue doesn't really come up in California, where concealed handgun licenses are much harder to get.

If Willis loses, she plans to carry her pistol out in the open, in a holster on her hip, which is, under Oregon law, perfectly legal.

"I've been done harm in my life and it won't ever happen again,"' she said about her reasons for wanting the gun. "I've never had to draw it"'