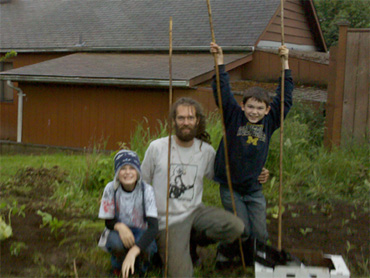 Nicholas Pouch runs an organic farm and a glassblowing studio on a 20-acre spread in southwest Washington's timber country. Spicy mustard greens, tomatoes and corn sprout in humid greenhouses as chickens and sheep roam nearby.

It would be an ideal place for children to romp, Pouch thinks. But his children can't be there because he's a medical marijuana patient.

A drug task force acting on a tip from his former partner raided his grow operation in 2007. Even though Pouch's criminal charges were dropped, she cited the arrest and his marijuana use in winning full custody of their boys, now 9 and 11.

For the past 2½ years, Pouch has seen the boys twice a month, during supervised visits at a neutral house in Olympia. "There's no reason anybody should have to go through this," Pouch said. "Why aren't they here, chasing snakes like they like to do?"

More than a decade after states began approving marijuana for medical use, its role in custody disputes remains a little-known side effect.

While those laws can protect patients from criminal charges, they typically haven't prevented judges, court commissioners or guardians ad litem from considering a parent's marijuana use in custody matters - even in states such as Washington, where complying patients "shall not be penalized in any manner, or denied any right or privilege," according to the law.

Arbiters often side with parents who try to keep their children away from pot. Medical marijuana activists in several states, including Washington, California and Colorado, say they've been getting more inquiries from patients wrapped up in custody-divorce cases in recent years as the ranks of patients who use marijuana swell.

Lauren Payne, legal services coordinator with a California marijuana law reform group called Americans for Safe Access, said that since mid-2006 her organization has received calls about 61 such cases.

In Colorado last month, an appeals court ruled that medical marijuana use is not necessarily a reason to restrict a parent's visitation. Washington courts have held otherwise.

"The court cannot countenance a situation where a person is using marijuana, under the influence of marijuana and is caring for children," an Island County, Wash., judge ordered in one such dispute. "There's nothing in the medical marijuana law that deprives the court of its responsibility and legal authority to provide for proper care of children so that people aren't caring for children who are under the influence of alcohol or drugs."

In that case, the medical marijuana patient, Cameron Wieldraayer, was granted only supervised visits with his two young daughters - a decision upheld by an appeals court.

Many patients insist that using pot makes them no less fit as parents, and that they shouldn't lose custody or visitation rights if there's no evidence they're abusing the drug.

According to the Washington, D.C.-based Marijuana Policy Project, two of the 14 states with medical marijuana laws - Michigan and Maine - specify that patients won't lose custody or visitation rights unless the patient's actions endanger the child or are contrary to the child's best interests.

Pouch, who grows marijuana in an old chicken coop, smokes a few puffs three or four times every day, and says he doesn't get high the way he did when he used marijuana recreationally in his younger days. He said he uses it to treat pain from carpal tunnel syndrome aggravated by glassblowing, as well as a shoulder that frequently pops out of its socket due to old sports injuries.

"I'm an outgoing, upstanding person. I do three different farmers markets and I'm a member of the Mason County Chamber of Commerce," said Pouch, 37. "I am not an activist at all, but I have the right to use this. It aids my pain, and it allows me to function in my everyday activities, where pills and opiates don't."

Pouch also has a young daughter with another woman, and is also allowed only supervised visits with her. This month, after a guardian ad litem made a favorable report about Pouch's parenting skills, a court commissioner awarded him custody - but then stayed the decision while the girl's mother challenges it.

Opposing spouses often argue that they have a right to keep their children away from illegal substances, and marijuana remains illegal under federal law.

With some other medications, such as narcotic painkillers or bipolar medications, judges can require tests to establish how much of the drug a parent has in his or her system, said Eleanor Couto, a family law attorney in Longview, Wash.

But treatment providers can't prescribe specific amounts of marijuana without running afoul of federal law, so it isn't always clear what constitutes an appropriate level of the drug.

"How do you monitor how much someone can smoke?" Couto asked. "How do know they're able to adequately care for that child? I think it's got to be a case-by-case basis."

Seattle lawyer Sharon Blackford noted that urine tests can establish how much marijuana is in a patient's system based on current use, and that monitoring is "as easy to do for medical marijuana as it is for alcohol."

Couto said she represents one father who worked out a tentative arrangement with his ex whereby he can continue to use medical marijuana, as long as someone else watches their child while he does.

In another case, she's representing a father who is trying to win primary custody of his teenagers for the first time because their mother is married to a medical marijuana patient who also has a history of minor criminal offenses and several drunken-driving convictions.

Early this year, a judge who called Washington's medical marijuana law "an absolute joke" and "an excuse to be loaded all the time" ordered that stepfather, Julian Robinson, to keep at least a quarter-mile from the teenagers because of his marijuana use, according to a transcript of the hearing.

That means Robinson can't be around the children he has raised for the past 13 years, even though they live in his home near Castle Rock, with his wife and their four younger children.

Robinson sometimes stays with friends or rolls out a foam sleeping pad in his neighbor's horse trailer. He misses baseball games and church services.

"It has torn my family apart," Robinson said. "We used to do everything together."

Pouch, who said he's spent $35,000 on legal costs in the past four years, hopes to persuade the court to grant him partial or even primary custody of his children.

In the meantime, they dug a garden last year at the Olympia home rented by South Sound Family Services where they have their supervised visits. Pouch brought in manure and vegetable starts last month. The boys planted corn, tomatoes, cucumbers and pumpkins.