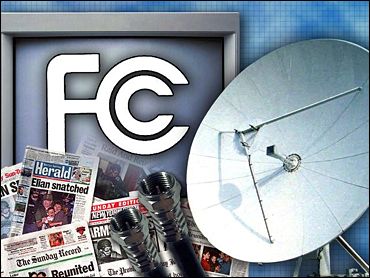 The Federal Communications Commission on Monday approved sweeping revisions of regulations governing the media martketplace — changes that broadcasters say will allow them to compete but critics allege will allow big players to dominate the market for news and entertainment.

By a margin of 3-2, the FCC allowed major networks to own stations reaching more households and permitted a single company to own newspaper, radio and TV outlets in the same market.

The outcome was expected and is a major victory for FCC Chairman Michael Powell, who was joined by his two fellow Republicans on the five-member FCC panel in approving the changes.

"Our actions will advance our goals of diversity and localism," Powell said. He said the old restrictions were too outdated to survive legal challenges and the FCC "wrote rules to match the times."

The two Democratic members, who voted against the new rules, said they mean a single company can own in one city up to three TV stations, eight radio stations, the cable TV system, cable TV stations and the only daily newspaper.

"The more you dig into this order the worse things get," said Michael Copps, one of the commission's Democrats. He said the changes empower "a new media elite" to control news and entertainment.

At least a dozen demonstrators turned out in front of the FCC before the meeting to protest the vote.

The FCC said a single company can now own TV stations that reach 45 percent of U.S. households instead of 35 percent. The major networks wanted the cap eliminated, while smaller broadcasters said a higher cap would allow the networks to gobble up stations and take away local control of programming.

The agency also eased rules governing local TV ownership so one company can own two television stations in more markets and three stations in the largest cities such as New York and Los Angeles.

The FCC kept a ban on mergers among the four major TV networks: ABC, CBS, NBC and Fox.

The FCC also changed how local radio markets are defined to correct a problem that has allowed companies to exceed ownership limits in some areas.

The government adopted the ownership rules between 1941 and 1975 to encourage competition and prevent monopoly control of the media.

A 1996 law requires the FCC to study ownership rules every two years and repeal or modify regulations determined to be no longer in the public interest. Many changes proposed since then were sent back to the FCC after court challenges.

Many media companies say outdated rules have limited their growth and competitiveness in a world changed by cable television, satellite broadcasts and the Internet. They claimed that more competition meant lower profits and fewer resources to spend on quality news and programming.

But opponents said the expansion of news outlets because of cable and satellite television and the Internet masked the fact that while those sources competed with broadcast television, a handful of major corporations still controlled much of the new outlets as well as the old.

Diverse interests opposed to deregulation say the relaxed rules would kick off a merger frenzy, putting a few large companies in control of what people see, hear and read. They say that would homogenize viewpoints and diminish local emphasis in news and entertainment.

They say most people still get news mainly from television and newspapers, and combining the two is dangerous because those entities will not monitor each other and provide differing opinions.

"Newspaper-owned television stations program more and better news and public affairs than any other stations," said John Sturm, president of the Newspaper Association of America.

News Corp. and Viacom Inc., which owns CBS and UPN, stand to benefit from a higher national TV ownership cap because mergers have left them above the 35 percent level. Those companies, along with NBC, persuaded an appeals court last year to reject that cap and send it back to the FCC for revision.

Lawmakers have split mainly along party lines. Democrats demand more public scrutiny of the changes while Republicans support Powell. Some lawmakers critical of the FCC have proposed legislation to counter relaxed regulations.

"This is not a complete deregulation of the media," Powell said on ABC. "There will be rules and restrictions. Everything that a media company would like to do is not going to be permitted."

"I don't particularly believe there will be a massive wave of mergers," he said.