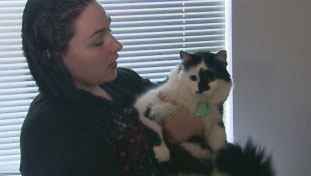 PORTLAND, Ore. -- A 22-pound house cat attacked a baby inside a Portland house, forcing the family and a dog to barricade themselves inside a bedroom, CBS affiliate KOIN reported Monday.

The Barker family called 911 shortly before 8 p.m. Sunday, officials said, but said the baby did not need medical attention. The 911 operator stayed on the phone and could hear the cat, Lux, screeching in the background.

"Every time we opened our back bedroom door, the cat would hiss," owner and mom Teresa Barker told KOIN.

She admitted the baby's father hit Lux after the baby was scratched but said he was merely being protective.

When officers arrived at the house, they saw the cat scram into the kitchen, where it jumped on top of the refrigerator.

The cat was soon captured and put into a crate.

"The cat remained behind bars in the custody of the family and officers cleared the scene and continued to fight crime elsewhere in the city," Portland police said in a release.

The family is still discussing whether to try to find a new home for Lux.