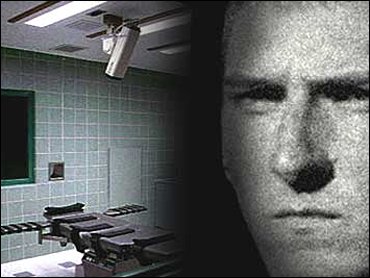 A Rhode Island woman who once led a group that investigated conspiracy theories in the Oklahoma City bombing said Wednesday she has been chosen by Timothy McVeigh to witness his execution.

Cate McCauley, 42, of Coventry, said she will join novelist Gore Vidal, reporter Lou Michel from The Buffalo (N.Y.) News and two defense attorneys who McVeigh has asked to watch him die next Wednesday in a Terre Haute, Ind., federal prison.

"I've never been for the death penalty, but this is all a part of history and it's part of a case that took four years of my life, so I guess in a way it's closure for me too," McCauley said by telephone Wednesday. "But it makes my stomach turn and my legs turn to Jell-O."

The Buffalo News and The Call of Woonsocket first reported McCauley's involvement Wednesday.

Kathy Pierce, spokeswoman for the federal prison in Terre Haute, Ind., said Wednesday she could not confirm McCauley would witness the execution since prison policy barred her from releasing witness names.

Neither of McVeigh's attorneys, Robert Nigh Jr. in Tulsa, Okla., and Nathan Chambers in Denver, returned messages left Wednesday morning at their offices.

McCauley, a free-lance graphic designer, stopped working four years ago to investigate the April 19, 1995, bombing for the Oklahoma City Bombing Investigation Committee, a citizens group whose members explored conspiracy theories about the case. She later worked as an investigator for McVeigh's defense team during his appeals.

She and McVeigh have corresponded by mail and spoken by phone, and the two met once last year in prison. McCauley said she has come to see him as two different people: the bomber with no remorse and an "intelligent, humorous, ordinary kid."

McCauley said she does not agree with what McVeigh did and has always made that clear to him, but also does not think he should be put to death.

tr>"There is something ghoulish about it," McCauley said.

When McCauley got involved with the committee, she said she had no links to the case, but was drawn by TV coverage of the blast at the Alfred P. Murrah federal Building that killed 168 people.

At first, she was convinced that a massive, possibly international, conspiracy of people had been involved in the bombing. But after hundreds of interviews and thousands of hours of research, she concluded that McVeigh, Terry Nichols and their former Army friend Michael Fortier were the only conspirators.

"There were a lot of things floating around, a lot of stories, and a lot of theories. I was given all the material to look at, and looked it them all, checked them back to their sources, and found out that the conspiracies weren't true," McCauley said.

Unlike Vidal, who has said he plans to write an article about the execution for Vanity Fair magazine, McCauley said she has no intention to publish her notes, but will try to make them available through the national Oklahoma City archives.

"I would hate for people to go there 50 years from now and find all this confusion without a counterbalance," McCauley said. "If, years from now, there are people who look at the conspiracy theories and there are no answers, it's causing pain now, is it going to continue to cause pain?"

Daniel Dunne, a spokesman for the Federal Bureau of Prisons, said he could not confirm witness names. McVeigh is allowed to invite five witnesses. A sixth seat, reserved for a spiritual adviser, will remain empty because McVeigh doesn't want one.