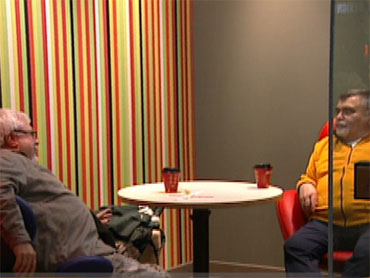 Ever since the first McDonald's franchise opened its doors in 1955, the Golden Arches have symbolized fast food. Now, the fast-food king wants you to stay awhile.

It's trying out a sleek, chic, upscale, European-style, modern new look in a Manhattan outlet -- the first of its kind in the United States, reports CBS News Correspondent Bianca Solorzano.

The makeover is similar to what the chain has done at thousands of outlets in Britain and France.

The restaurant is outfitted with outlets for plugging in laptops (for its free WiFi), flat-screen TVs, upholstered, vinyl chairs instead of Fiberglas seats bolted to the floor, lounge areas, and subdued lighting. Employees' all-black uniforms suggest a hip cafe.

"I think," says Adweek advertising critic Barbara Lippert, "they're gonna sort of change places with Starbucks. They're gonna get the freelancers and the online daters and the professional crowd who, you know, increasingly set up office wherever they are."

It's the same menu, Solorzano observes, but customers are staying longer.

One customer told her, "We end up talking a lot more, which is really nice, because I get to bond with my daughter over a McDonald's dinner!"

The owner of the re-done McDonald's, Paul Hendel, says he visited modern ones in London and Paris to get the flavor of the atmosphere.

And, says Solorzano, more of the Euro-style McDonald's may begin to pop up across the U.S. -- if this one fares well.

Hendel also told Solorzano his McDonald's is "wowing," customers, many of whose jaws drop when they walk in: