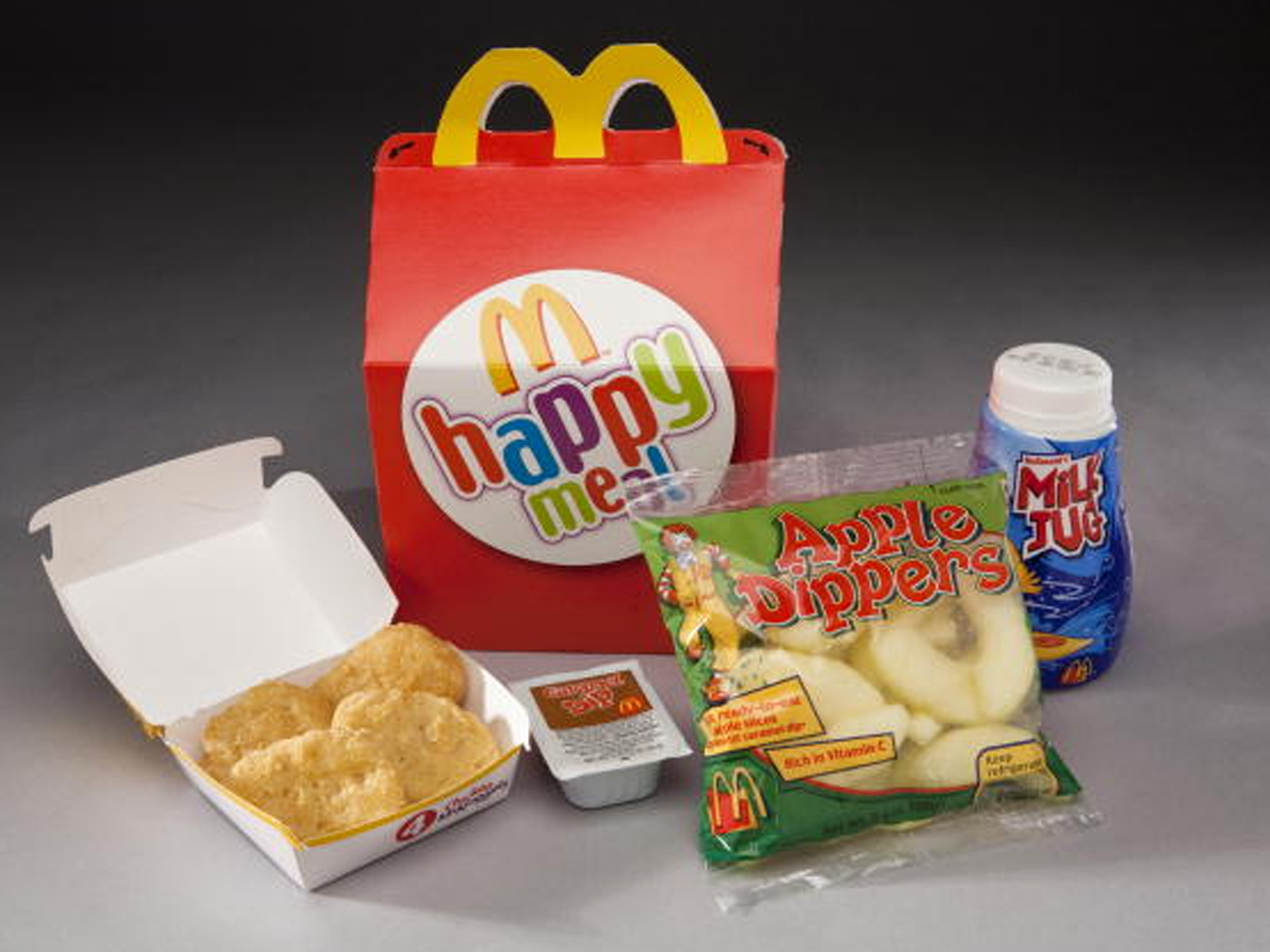 NEW YORK -- Changes made last year to McDonald's Happy Meals selections for children may be helping kids to cut calories, according to a new study.

"We were curious to know how diners might have changed what they were ordering in order to make up for the reduction of calories," Andrew Hanks, one of the study's authors, told Reuters Health.

Hanks is a post-doctoral research associate in the Department of Applied Economics and Management at Cornell University in Ithaca, New York.

"That was the component we were really interested in because there's evidence of compensation when your calories decrease," he said.

In addition to adding apple slices, the new Happy Meals contain a smaller portion of French fries and non-fat chocolate milk was offered along with 1 percent-fat white milk. McDonalds still offers the same entrée choices for the meal - four chicken nuggets, a hamburger or a cheeseburger. But the change in side items results in 98 fewer calories per meal, researchers say.

They had access to transaction records for June, July and August of 2011 and 2012 for 30 McDonalds restaurants located throughout the United States. They found 232,424 transactions that included the purchase of a Happy Meal.

They looked at whether the reduction of calories in the new version of the Happy Meal caused consumers to order more hamburgers and cheeseburgers versus the chicken nuggets, which are lower in calories.

But they found that the selection of chicken nuggets remained the same - about 61 percent. More chocolate milk was ordered, 20 percent compared to 16.5 percent before the meal change, but since it was a new offering, it's not possible to determine if the additional orders were due to calorie compensation or restaurant promotion, they report in the journal Obesity.

More white milk was also ordered, rising from 5 percent of orders to 6.5 percent, and regular soft drink orders dropped from 58 percent to 52 percent.

The researchers don't know how much of the food was consumed, whether or not children ate more later to make up the difference in calories or how many of the meals were ordered by the children or by the parents.

"In March 2012, we began automatically including apple slices in McDonald's Happy Meals. Since then, we have introduced more than 770 million packages/bags of apples slices as a part of Happy Meals. Also, we have reduced the number of calories in our most popular Happy Meals by an average of 20 percent," Cindy Goody, senior director of Menu Innovation and Nutrition for McDonald's USA, LLC, told Reuters Health in an email.9

"The changes we made to our Happy Meal reflects our ongoing progress towards our multi-year Commitments to Offer Improved Nutrition Choices, which include a commitment to automatically include produce or low-fat dairy in each Happy Meal," Goody added.

A study that looked at children's meals across the U.S. in 2008 found "the overwhelming majority" were of "poor nutritional quality."

Ameena Batada of the University of North Carolina wrote in a 2012 report in the journal Childhood Obesity, after reviewing menus at the 50 largest U.S. restaurant chains, that at two-thirds of the chains, 100 percent of children's meals failed to meet nutritional standards for things like calories, salt, sugar and fats.

"There were some healthier meals available, which suggests that restaurant chains should be able to reformulate their existing menu items to reduce calories, saturated and trans fat, and sodium and add more healthy options like fruits, vegetables, and whole grains," Batada wrote.

"We were able to find that calories fell by about 104 from the three-item meal to the four-item meal," Hanks said. "We also found that there was no substitution for a higher calorie entrée. The diners stayed with the chicken nuggets. But there was this increase in the purchases in milk, which is beneficial. It was a win on those accounts."

Hanks noted that his team's study doesn't mean fast foods are healthy foods but that adding apples and increasing milk consumption is a step in the right direction.