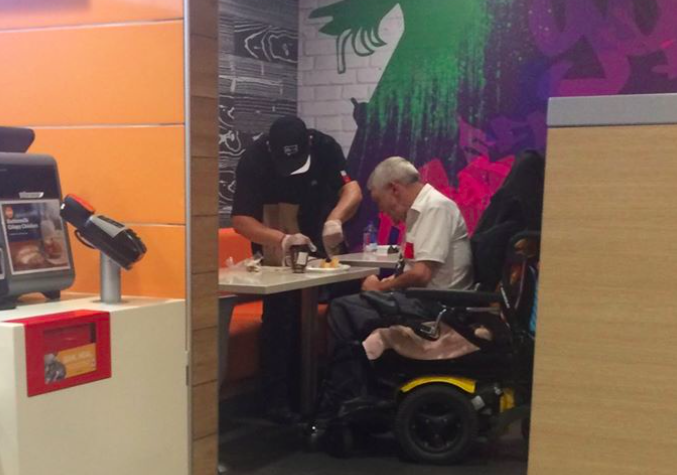 When a handicapped man needed someone to help him cut and eat his meal, he chose the right person -- a McDonald's cashier.

Hungry and determined, the elderly man wheeled himself over to the counter and asked, "Help me, please."

Destiny Carreno, a customer standing in line behind him, stared at the young man behind the register, waiting for his response.

To her surprise, the cashier named "Kenny" shut down his register, put on gloves and walked out of the kitchen and toward the man. He sat down and quickly began cutting the man's meal and helped him eat.

"Seeing this today brought tears to my eyes!" Carreno said in a Facebook post, along with a photo of the pair. "To be honest, I thought the cashier wasn't going to help, especially during rush hour in downtown Chicago."

Carreno, whose uncle has a case of quadriplegia similar to what she understands the man had, believed the young employee's act of kindness needed to be recognized by "not just me, but everyone else as well."

"I know firsthand the difficulties they face in today's society, especially when it comes to the help they need for the smallest things like eating a meal and really being at the mercy of good people," Carreno told CBS News. "As a family member of a handicapped person, it struck a personal cord with me and I thought others would feel the same appreciation I did."

The Facebook post was shared by more than 315,000 people and dozens praised the man for his gesture.

"My heart melts for this," one user commented. "I would've done the same thing for him."

"Employee of the year!" another exclaimed.

At the restaurant, Carreno realized no one else was watching the exchange between Kenny and the handicapped man.

"I was probably the only person intrigued by the situation," she said. "This guy deserved to be thanked, and I couldn't just leave and not show my appreciation."

Unfortunately, Carreno couldn't stick around to thank the kind cashier, but she hopes he knows he's appreciated.

"Something that seems so small a gesture can have such profound impact, and that's something we should carry with us each day and in all our interactions with others," Carreno said.