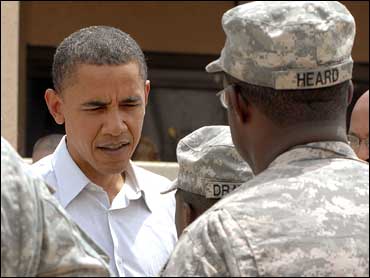 Gen. Stanley McChrystal wanted to ask President Obama for 50,000 more troops for Afghanistan on top of the 68,000 already stationed there, but he was convinced to lower the request to 40,000, reports CBS News White House correspondent Chip Reid.

Sources tell Reid that McChrystal, the top U.S. commander in Afghanistan, considers the lower number to be a firm bottom line McChrystal believes anything short of 40,000 increases the risk of failure, Reid reports.

The president received McChrystal's former request last Thursday, one day before flying to Copenhagen to support Chicago's bid for the 2016 summer Olympics, Reid reports. Mr. Obama met with McChrystal on board Air Force One during that trip.

But White House officials did not confirm until today that Mr. Obama had received the formal request. The president is reportedly deliberating on the request as the war launched after the Sept. 11, 2001, terror attacks reached its eight-year mark today with no end in sight.

Obama was not expected to discuss the at a meeting with war advisers Wednesday but was likely to do so on Friday.

Pentagon and White House officials have said repeatedly that the discussion of more troops in Afghanistan would not begin until after Obama decided on a strategy to try to salvage the faltering military campaign there and in neighboring Pakistan.

Details of the document have not been officially released.

Sources tell Reid that the president may be leaning toward a mid-range number in an effort to get support from skeptical Democrats. Among those at today's war council meeting sources say Secretary of State Hillary Clinton is leaning toward supporting McChrystal's request, while Vice President Joe Biden opposes it

White House spokesman Robert Gibbs would not detail Obama's reasoning for asking for the request now, saying only: "He wanted to take a look at it."

Obama is in the midst of a review of the flagging war in Afghanistan, a campaign that includes Pakistan, the subject of Obama's security meeting on Wednesday. Although much of the focus has been on whether Obama will send in more troops, the effort encompasses vast political and diplomatic challenges, too.

"I think everybody is waiting for people to walk out of a room and give everyone a number," Gibbs told reporters, referring to a troop increase. "If you look at some of the coverage of what's going on, there's no discussion about the complexity of the problem, the multilayered aspects of it. That's what we're digging into."

Obama has ruled out withdrawing from Afghanistan, or significantly drawing down forces by shrinking the focus of the war to a narrow counterterrorism effort.

The war has claimed nearly 800 U.S. lives and sapped American patience. Launched after the terrorist attacks to defeat the Taliban and rid al Qaeda of a home base, the war has lasted longer than envisioned.

House and Senate leaders of both parties emerged Tuesday from a nearly 90-minute conversation with Obama with praise for his candor and interest in listening. But politically speaking, all sides appeared to exit where they entered, with Republicans pushing Obama to follow his military commanders and Democrats saying he should not be rushed.

The president has not shown his hand on troop increases. Obama has already added 21,000 troops this year, raising the total to 68,000.

Obama also gave no timetable for a decision during his meeting with lawmakers, which prompted at least one pointed exchange.

Inside the State Dining Room, where the meeting was held, Obama's Republican opponent in last year's presidential race, Sen. John McCain, told him he should not move at a "leisurely pace," according to people in the room.

That comment later drew a sharp response from Obama, they said. Obama said no one felt more urgency than he did about the war, and there would be nothing leisurely about it.

Obama may be considering a more modest building of troops - closer to 10,000 than 40,000 - according to Republican and Democratic congressional aides. But White House aides said no such decision has been made.

"We do recognize that he has a tough decision, and he wants ample time to make a good decision," said House Republican leader John Boehner. "Frankly, I support that, but we need to remember that every day that goes by, the troops that we do have there are in greater danger."

Whatever the decision on troop levels, Obama said his focus is still to keep al Qaeda terrorists from having a base from which to launch attacks on the U.S or its allies. He heard from 18 lawmakers and said he would keep seeking such advice even knowing his final decision would not please them all.

The president made clear at Tuesday's meeting that he would build up U.S forces into the hundreds of thousands, just as he ruled out withdrawing forces and focusing on a narrow counterterrorism strategy.

"Half-measures is what I worry about," McCain, R-Ariz., told reporters. He said Obama should follow recommendations from those in uniform and dispatch thousands of more troops to the country - similar to what President George W. Bush did during the 2008 troop "surge" in Iraq.