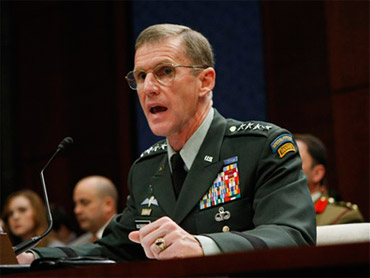 The top U.S. and NATO commander in Afghanistan said Friday that the coalition depends too much on private-sector contractors, and insisted his forces are keeping close watch on the flow of Taliban fighters who are training in Iran.

Gen. Stanley McChrystal, during a four-day visit to France, said the coalition in Afghanistan has become too dependent on private contractors in the effort to stabilize the country.

"I think we've gone too far," McChrystal said at France's IHEDN military institute. "I actually think we would be better to reduce the number of contractors involved."

Alternatives could include increasing the number of troops "if necessary," or "using a greater number of Afghan contractors, or Afghans to help with the mission," he said.

McChrystal said the use of contractors was founded upon "good intentions," such as to limit military commitments or to save money for governments.

"I think it doesn't save money," he said. "We have created in ourselves a dependency on contractors that I think is greater than it ought to be."

A Congressional Research Service report in January about the Pentagon's use of contractors in Iraq and Afghanistan said that as of September, more than 11,400 private security contractors were in Afghanistan. It cited Pentagon figures.

The report, which has been posted on the Web site of the Federation of American Scientists, said 94 percent of contractors in Afghanistan were armed - and 90 percent were local nationals.

The issue of contractors - who carry out tasks as diverse as security for diplomats, advisory roles or mercenary work - has been a thorny one for U.S. and some allied commanders and policymakers.

The company once known as Blackwater was re-dubbed Xe after a deadly shooting incident by its guards that left 17 people dead in Baghdad. Xe is now trying to win Defense Department approval for a bid to train police in Afghanistan.

Also Friday, McChrystal pointed to "indications" that some Taliban fighters have had training in Iran, and that weapons and ammunition have come across Iran's border with Afghanistan.

"The numbers are not operationally significant, they have not changed the fight, and I am not prepared to tell you that the government of Iran is executing that as a policy," he said.

"But I am prepared to say that we watch it closely, and if something were to increase, it would be something that would concern me significantly," he said.

A type of Iranian explosive device used heavily by Shiite militias in Iraq - known as explosively formed projectiles - have not turned up in Afghanistan in large numbers.

In the past, Iran's Shiite republic has been hostile to the Taliban, who adhere to and preach a hardline Sunni form of Islam. Tehran didn't oppose the U.S.-led ouster of the Taliban from power in Afghanistan in 2001.

McChrystal was in Paris on a European swing aimed in part to thank NATO allies for their roles in Afghanistan. McChrystal is next to visit Berlin, said Adm. Christophe Prazuck, a French military spokesman.

Polls show public opinion in many European contributor countries has soured over the Afghan mission - now in its ninth year. France has about 3,750 troops committed to Afghanistan.