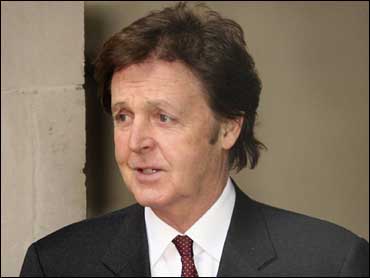 "It's very tough, you know, going through a separation," McCartney said in an interview that aired Thursday on ABC News' "Good Morning America." "But I'm just trying to keep my dignity, trying to just move forward and not talk about it in interviews, really."

McCartney and Mills, a 39-year-old former model and activist who recently appeared as a contestant on ABC's "Dancing With the Stars," are in divorce proceedings. They have a 3-year old daughter, Beatrice.

When asked about the split, McCartney responded: "I'm OK, thank you. Surprisingly OK."

He wrote "Dance Tonight," a track from the studio disc, while learning to play the mandolin over the Christmas holidays.

"It became sort of catchy and it was a foot-stomper in the kitchen," he recalled. "A load of people came round and (Beatrice) particularly came running in and danced."

McCartney, who will be 65 on June 18, said he now regrets writing the Beatles classic "When I'm 64."

"It just draws great attention to that age and reaching it," he said. "In actual fact, it's actually not been bad, you know, really. People still feed me and one or two people still need me."