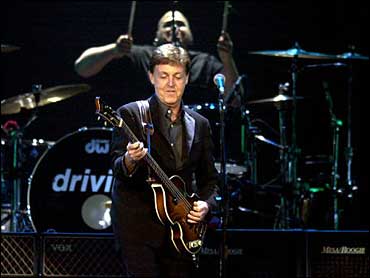 The sheet of note paper with the scrawled lyrics had been expected to fetch up to $116,000 at an auction scheduled for Tuesday, but McCartney took the matter to the High Court, claiming the piece had disappeared from his home.

The lyrics will remain at Christie's London headquarters until ownership is decided by agreement or a trial.

Richard Meade, a lawyer for McCartney, said the sheet of paper with the lyrics was either stolen during one of several burglaries at the singer-songwriter's west London home or was taken by someone working for him.

Meade told the court the words were of great emotional value to his client because the song was written to cheer up the young Julian Lennon when his father, John, was divorcing his mother, Cynthia.

The lyrics were sent to Christie's for auction by Florrent Tessier, a Frenchman who bought them from a street market stall in London for 10 pounds, then worth about $24, in 1971 or 1972.

Meade said Tessier must have realized the value of the document and should have been suspicious of its origins.

Meade said Tessier had the leaf of paper framed and displayed in his home, even though he now claims he did not realize it was an authentic document until six years ago when he had it valued by the auction house Sotheby's.

Richard Morgan, representing Christie's, said McCartney wrote the lyrics for "Hey Jude" in 1967 and 1968 but had provided no evidence he had ever owned the piece of paper on which they were written.

Morgan also questioned why McCartney had never reported the lyrics stolen if he placed such high sentimental value on them.

Morgan said the singer should go to the auction and bid for the lyric sheet, claiming whatever the former Beatle paid for the lot would be recoverable in damages if it was later proved he was the rightful owner.

However, High Court Justice Laddie said the presence of McCartney as a bidder at the auction would immediately inflate the price.

"Sir Paul would be made to bid at auction for something he thinks is his property. Everybody knows he has a deep pocket and the price will go up and up," he said.

"He may have to keep on bidding, against the risk that his claim to be the owner of the document may not resolve in his favor at trial."