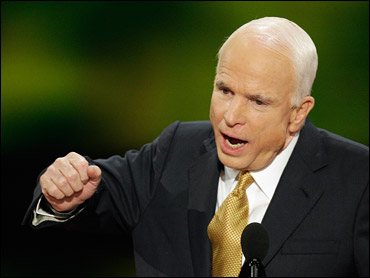 John McCain reclaimed top billing at his nominating convention Thursday night, no easy task following the debut of his running mate, Sarah Palin, on the national stage. But even if McCain had been overshadowed until tonight by the Alaska Governor, his message still had dominated the week. McCain brought the convention to an end by accepting the nomination of his party then promptly distancing himself from its eight years of executive rule with one word: Change.

Appropriating Barack Obama's own message may seem like a brazen political ploy, but for McCain, it's less of a stretch than it would be for most other Republicans. As he and the rest of the speakers here in St. Paul emphasized over and over, McCain sees himself as a "maverick" politician whose past political fights have been waged as much within his own party as without. And it's that reputation - one which has enraged Republicans at times - which now become's the GOP battle cry.

Knowing he couldn't really compete with the scene at Mile High Stadium one week ago, where 84,000 people gathered to hear Obama's acceptance speech, McCain did some remodeling of his stage inside the Xcel center here Thursday, crafting a more intimate setting that brought him closer to the thousands of delegates who came to cheer him on. Taking the stage under a single bright spotlight soon replaced with a gigantic screen filled with a fluttering American flag, McCain may not have resembled a rock star, but he was at least in his element.

The man of the hour won the nomination without the support of those he must now rally to his cause. This is the presidential candidate who, in 2000, called Pat Robertson and Jerry Falwell "agents of intolerance," who stuck it to those agents with a campaign finance reform bill that many believe has crippled their traditional financial advantage, and who bucked conservatives on immigration reform.

How would he get them back? With Sarah Palin. Picking this upstart conservative hero from the hinterlands of Alaska helped solve at least two very large problems for McCain in one fell swoop: It ignited the simmering passions of the GOP base while at the same time reinforcing the now-central message of his candidacy. "If character is the measure in this election," Palin said in her speech Wednesday night, "and hope the theme, and change the goal we share, then I ask you to join our cause."

Change, that word which has become the clarion call of this presidential election, is not an easy word to apply to a party which has held the White House for the last eight years and controlled Congress for six years in the same time period. But with his vice presidential selection, the overriding message of the convention and his speech tonight, McCain made clear he is going to try.

"Let me offer an advance warning to the old, big spending, do nothing, me first, country second Washington crowd," McCain said, "change is coming." The message was just change but reform, a near-crusade against the traditional power structure. "I've fought corruption," the candidate sought to remind voters, "and it didn't matter if the culprits were Democrats or Republicans. They violated their public trust, and had to be held accountable. I've fought big spenders in both parties, who waste your money on things you neither need nor want, while you struggle to buy groceries, fill your gas tank and make your mortgage payment."

Reform wasn't the only message reinforced in St. Paul during a shortened convention. McCain's biography, his years spent in a POW camp and his family's history of military service were around every corner and in every speech. His speech included many other elements as well, a litany of mostly conservative policy positions and a reminder of his experience when it was convenient, such as on foreign policy. He didn't ignore the war in Iraq, instead touting it as a positive as he has throughout the campaign.

Unlike Obama, McCain did not delve deeply into policy specifics, preferring instead to rely on broad principles. "We believe in low taxes; spending discipline, and open markets," he said. "We believe in rewarding hard work and risk takers and letting people keep the fruits of their labor. We believe in a strong defense, work, faith, service, a culture of life, personal responsibility, the rule of law, and judges who dispense justice impartially and don't legislate from the bench. We believe in the values of families, neighborhoods and communities. We believe in a government that unleashes the creativity and initiative of Americans. Government that doesn't make your choices for you, but works to make sure you have more choices to make for yourself."

And while he sought to draw some contrasts with Obama, he also made a clear attempt to reach out to swayable voters with a nod toward the Democrat and reminders of his occasional habit of reaching across the aisle.

"Despite our differences, much more unites us than divides us," McCain said. "We are fellow Americans, an association that means more to me than any other. We're dedicated to the proposition that all people are created equal and endowed by our Creator with inalienable rights. No country ever had a greater cause than that. And I wouldn't be an American worthy of the name if I didn't honor Senator Obama and his supporters for their achievement."

And he included the call to service he's made so many times. "If you're disappointed with the mistakes of government, join its ranks and work to correct them," he urged. "Enlist in our Armed Forces. Become a teacher. Enter the ministry. Run for public office. Feed a hungry child. Teach an illiterate adult to read. Comfort the afflicted. Defend the rights of the oppressed. Our country will be the better, and you will be the happier -- because nothing brings greater happiness in life than to serve a cause greater than yourself."

Most of all, though, McCain's speech wrapped what has become his theme - change. "Country First" was how this convention was billed and in his speech, McCain sought to illustrate just what that means. He delivered a solid speech, not a flashy one, as befitting his style. His convention managed to rally his party and produce some unexpected excitement in the form of his surprise vice presidential selection.

The question remains whether he can convince enough voters that it all represents a fundamental "change" in Washington. If he can, this election may prove to be closer than anyone would have predicted even one week ago.