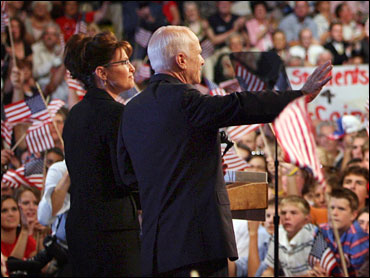 CBS News senior political correspondent Jeff Greenfield takes a look at the pros and cons of this bold, maybe risky pick of relatively unknown Sarah Palin - one that suggests the McCain camp felt the Democrats pulled off a successful convention that required a "gee whiz" move.

Pro: She's a woman. You probably noticed that. It could be a way to draw disaffected Democrats and independents who felt Clinton was victimized by gender bias.

Con: But if it's seen as an "affirmative action pick" - one made mostly because she is a woman - that might not be the way into those white working-class men.

Pro: A fresh start. As a Republican who's fought her own party's establishment in Alaska, she underlines McCain's "maverick" image, and implies a break with the Republican Party, whose brand is badly tarnished.

Con: That experience issue you heard about may kick up the "age" issue. Can you put someone with no connection with the wider world a "heartbeat away" from the Oval Office with a 72-year-old president?

Pro: She delights the right. The evangelical community sees her as a heroine - she's one herself, and that helps McCain with part of the GOP base who have had a testy relationship with her.

Con: I's her first time in the ring, unlike McCain, Biden, and Obama. Can she handle the frenzy of intense media scrutiny - answer questions about, say, international conflicts.

One other key here: She's the mother of a Down Syndrome child, one of four million American children with disabilities. For millions of parents, and relatives of such children, the idea of someone in the councils of power who really understands their needs could be an "x" factor in this campaign we simply don't know how to measure.