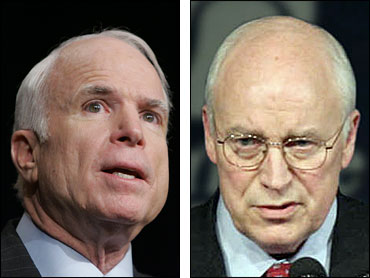 
He's a highly effective fundraiser in an election cycle where Republicans are starved for cash, a hero to the wing of the party that views John McCain with the most suspicion. He has four decades of campaign experience, ranging from a short stint running Gerald Ford's election bid in 1976 to two successful races on the presidential ticket.

Yet despite that pedigree, Vice President Dick Cheney is unlikely to share a stage with McCain anytime soon-and may not be called on to play any role at all in the 2008 presidential campaign.

In part, it's a reflection of political expediency. Though Cheney is one of the nation's most influential and talked about vice presidents ever, his favorability ratings are near toxic lows.

But Cheney and McCain also have had a rocky relationship.

They have clashed publicly and privately during the Bush years on matters ranging from the treatment of terrorist detainees to former Defense Secretary Donald Rumsfeld. Most recently, they've been on opposite sides on the idea of a gas tax holiday and on a Cheney-backed energy bill.

As a result, Cheney finds himself on the outside looking in, without a clear role to play in one of the most consequential campaigns in history and one where his signature foreign policy legacy is on the line.

Cheney spokeswoman Lea Anne McBride said the vice president had not yet campaigned for McCain and had not, to her knowledge, been asked.

"I don't think the McCain people want Cheney anywhere near him," said a former Cheney aide.

Asked about what role Cheney would have in the campaign, McCain communications director Jill Hazelbaker only said: "John McCain will always treat the vice president with respect."

McCain sources note that there are no plans for Cheney and McCain to campaign together and most observers view such a prospect as highly unlikely, given Cheney's low poll ratings and Democratic efforts to frame McCain as the third term of the Bush administration.

Still, Cheney sympathizers believe the vice president can be helpful.

"I think it's clear that McCain's biggest problem is with the conservative base of the party and that's where the vice president is strongest," said a close Cheney adviser. "If McCain's smart, that's where he'll use him," the adviser added, suggesting talk radio as a possible venue.

"Instead of pushing the vice president away, I'd use him to build bridges with various conservative constituencies," added Cesar Conda, a lobbyist who worked for Cheney in the first term. "That's where the party really needs him because the conservative base is in the doldrums."

But even in a limited capacity, Cheney might make for an awkward surrogate given the prickly nature of his relationship with McCain.

After McCain said last year that Rumsfeld, Cheney's friend and mentor in the Ford administration, would "go down in history as one of the worst secretaries of defense in history," the vice president made plain his displeasure.

"I just fundamentally disagree with John," Cheney told ABC News in an interview. "John said some nasty things about me the other day, and then next time he saw me, ran over to me and apologized. Maybe he'll apologize to Rumsfeld."

Cheney was alluding to an interview McCain gave to Politico in which he said President Bush "listened too much to the Vice President" and had been "very badly served by both the vice president and, most of all, the secretary of defense."

Of course, McCain hasn't always been critical of Cheney.

In an interview he gave to the Weekly Standard's Stephen Hayes in 2006 for Hayes's biography, "Cheney: The Untold Story of America's Most Powerful and Controversial Vice President," McCain said: "I will strongly asser to you that he has been of enormous help to this president of the United States."

Asked whether he'd be interested in Cheney had the vice president not already have served under Bush for two terms, McCain said: "I don't know if I would want him as vice president. He and I have the same strengths. But to serve in other capacities? Hell, yeah."

For now at least, the two appear to have settled into something of a non-aggression pact. It helps that they don't talk-and that McCain currently plays little role in Senate policy-making.

There have, however, been some mild flare-ups that have caught the attention of both camps.

Speaking at the National Press Club last week, Cheney made news by dismissing a central element of McCain's nascent general election campaign: a summertime suspension of the federal gas tax.

"I think it's a false notion, in the sense that you're not going to have much of an impact, given the size of the gasoline tax on the total cost of the gallon of gas," Cheney said.

The following day, McCain returned the favor by holding up his opposition to the industry-backed energy bill that Cheney helped shape.

"[H]e voted for the energy bill promoted by the president and Vice President Cheney, which gave even more breaks to the oil industry," McCain said of Barack Obama, making sure to get in a dig at the bill's patron. "I opposed it because I know we won't achieve energy independence by repeating the mistakes of the last half century."

McBride said she wasn't sure if Cheney knew about McCain's support for the gas tax suspension. "There are going to be areas where there is disagreement," she acknowledged.

Still, McBride emphasized that Cheney supports McCain and mentions him in all his political speeches while also warning of what an Obama administration would look like.

"The vice president has always said he's willing to do whatever it takes to help Republicans," she said.

What is most likely, say friends and observers of Cheney, is for the vice president to reprise his 2006 role as down-ballot fundraiser and server of partisan red meat.

"He is incredibly popular with the Republican base," noted David Keene, head of the American Conservative Union and a Cheney friend dating back to their days battling one another in the 1976 GOP primary between Ford and Reagan. "I think you'll see him out there, particularly in conservative areas. Members of Congress want him for fundraising."

Though it has been little-noticed, Cheney has again taken with gusto to the GOP's rubber chicken circuit.

In the weeks ahead, he'll raise cash for the National Republican Congressional Committee, the Wyoming GOP and a Georgia congressional candidate.

In addition, he'll speak before friendly interest groups to help push the conservative message. He's scheduled to speak Wednesday to the U.S. Chamber of Commerce's board of directors.

"There is a huge segment of the population that thinks Dick Cheney is a hero - despite what the press may think and what liberal Democrats may think," said Ron Kaufman, a longtime GOP strategist and fundraiser.

The what-to-do-with-Cheney question could get uncomfortable when the GOP meets for theirconvention in September. Lame duck presidents have traditionally spoken at these party gatherings, but there hasn't been a lame duck vice president.

"No decisions have been made on the program yet," is all a McCain aide would say about the plan for St. Paul.

What happens after Labor Day, when the focus of the campaign turns away from fundraising and to made-for-media rallies, is also still an open question.

"It's hard to predict the future," said RNC spokesman Alex Conant. "In past cycles, the vice president has been a tremendous asset, especially to many of our congressional candidates."

But a highly visible role for Cheney, even in red states, risks drawing unfavorable attention on McCain and the GOP's slate of candidates, though.

"We're in uncharted territory with the money deficit," Kaufman said. "The most important thing I would do with him is have him keep raising money."

In his highest-profile campaign appearance so far this cycle, Cheney didn't help much. He stood with a Mississippi congressional candidate at a rally the night before a special election in a conservative-minded House district last month, but couldn't salvage the race.

"The last time they put him on the road was for the Mississippi special, and look at how he worked there," crowed Rep. Rahm Emanuel, the former House campaign chief for the Democrats and currently the caucus chairman. "I look forward to and I will pay the travel fees to put Vice President Cheney out on the road to talk about energy policy. Because it will remind this country of where this administration has been and who their friends are. And their friends are doing very well."

Cheney is said to be philosophical about whether he can or can't help the GOP ticket this year.