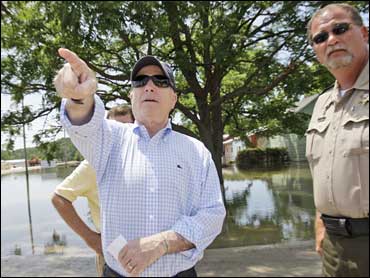 Sen. John McCain toured flood-damaged southeastern Iowa on Thursday, walking past half-submerged buildings, washed-out roads and thousands of sandbags filled hurriedly in a vain attempt to hold back the waters.

"I know I speak for all of America. We'll do everything necessary to try to rebuild their lives," the Republican presidential candidate said of residents of a town of 1,900 at the confluence of the Cedar and Iowa Rivers.

The town experienced record flooding in recent days, and although the waters have begun to recede, National Guard trucks blocked access to washed-out roads and the municipal water system had not yet been returned to operation.

McCain peppered Mayor Dan Wilson with questions as they walked through town looking at the damage. Wilson said tens of thousands of sandbags had been filled to create makeshift levees that prevented flooding from being worse.

"So you lost the battle but you won the war," said the Arizona senator, looking out at a department store, day care center and motel partly under water.

In another section of town, a shed lay on its top in muddy floodwaters in a store parking lot. Although the water is receding, what is left will have to be pumped out because its return to the river is blocked by permanent levees built after floods struck the area in 1993.

McCain flew to Iowa the same day as President Bush — although the two did not cross paths — and as the White House and key House leaders agreed on $2.7 billion as a down payment for federal flood relief.

Sen. Barack Obama, who will be McCain's rival in the fall campaign for the White House, went to Quincy, Ill., last week, where he helped fill sandbags before the flooding there.

Flooding was visible from McCain's plane as he flew into Burlington, astride the Mississippi River and about an hour's drive from Columbus Junction.

His first stop was at a town hall, where a sign cautioned volunteers about avoiding heat-related illnesses.

The senator also chatted briefly with local health care professionals whose offices have been flooded. "I hope we can get you back in business right away, right away. Whatever assistance you need I'm sure you will get," he said.

McCain also praised the work of volunteers who had filled the sandbags and taken other measures to protect the town.

For all the damage, though, Sheriff Curt Braby told McCain another town in Louisa County had taken a worse blow. "Oakville is still under water. We have a lot of roads that need to be rebuilt," he said.