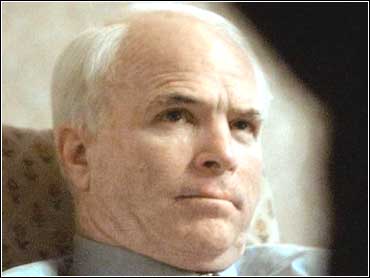 John McCain will not take part in this week's GOP presidential campaign debate in California. Aides say they pulled out because rival George W. Bush was slow to agree to the event and that sparked scheduling conflicts.

McCain's aides denied the move represented a shift in strategy and resources away from California toward other important states, like New York, that vote on March 7.

Bush, who was having none of the explanation, said McCain was ducking.

"He's going to have to explain why he's not going to this debate," said Bush. "I was led to believe earlier this week that everybody had accepted."

Harris dismissed Bush's sudden focus on campaign debates. "They lose a couple of primaries and all of a sudden they're born-again debaters."

McCain, meanwhile, has accepted an offer to debate on NBC's Meet the Press on Sunday, March 5 in "either New York or Washington." The McCain camp says he'll be in Buffalo campaigning on Sunday and hopes Bush will join him.

Democrats Al Gore and Bill Bradley have held a similar joint appearance on the program.

The decision to pull out of the California debate was the subject of heated debate within the McCain camp. The California leadership raised strong objections and expressed fear that not attending the event would send a signal he isn't committed to the giant state.

Dissidents warned that McCain's upcoming trip to California, which ends hours before the scheduled debate, will be dominated by questions about skipping the event, and that it would give Bush an excuse to avoid future debates.

McCain has scheduled six campaign days in California before the primary and is running $3 million in television commercials there, an aide said. Officials are considering adding another day to that effort.

While Bush sought to cast the issue as McCain ducking, McCain aides had a differing view.

They said Bush had initially turned down the California debate, then changed his mind only after McCain had assembled an intense campaign schedule in New York. That schedule was impossible to alter, said aide Lanny Wiles.