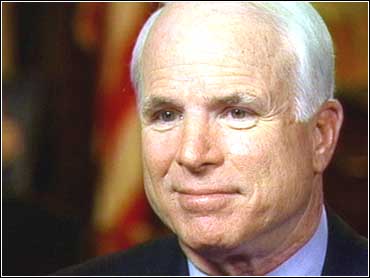 Sen. John McCain said Tuesday he had been "tainted" by donations from Global Crossing, but never acted improperly on behalf of the troubled telecommunications firm.

The Arizona Republican has received more money from Global Crossing than any other member of Congress.

"I am tainted by this because I received money from them," McCain told reporters after addressing a luncheon in Los Angeles about the need for campaign finance reform.

"All politicians are under a cloud," he said, referring to campaign finance rules that allow corporations to give millions of dollars to both parties.

Global Crossing filed the fourth-largest bankruptcy case in U.S. history last month. The Securities and Exchange Commission and the FBI are investigating the company's accounting methods.

Global Crossing has made political donations of about $3.5 million during its five years of existence.

McCain collected $31,000 from the firm's employees in March 1999 for his presidential campaign. The same month he urged the Federal Communications Commission to open the market for laying undersea fiber optic cable, a market controlled by AT&T that Global Crossing was trying to penetrate.

McCain said he never mentioned Global Crossing specifically to the FCC, but knew the firm would be the beneficiary of any reform.

McCain said his request to open the market, made when he was chair of the commerce committee, was in line with his long-standing goal of industry deregulation.

"My whole record has been for competition in telecom," he said. "I've written hundreds of letters to the FCC on behalf of firms that have never given me a dime."

The senator said he had never provided any favors to Global Crossing.

Global Crossing, which filed the fourth-largest bankruptcy case in U.S. history last month, has made political donations of about $3.5 million during its five years of existence.