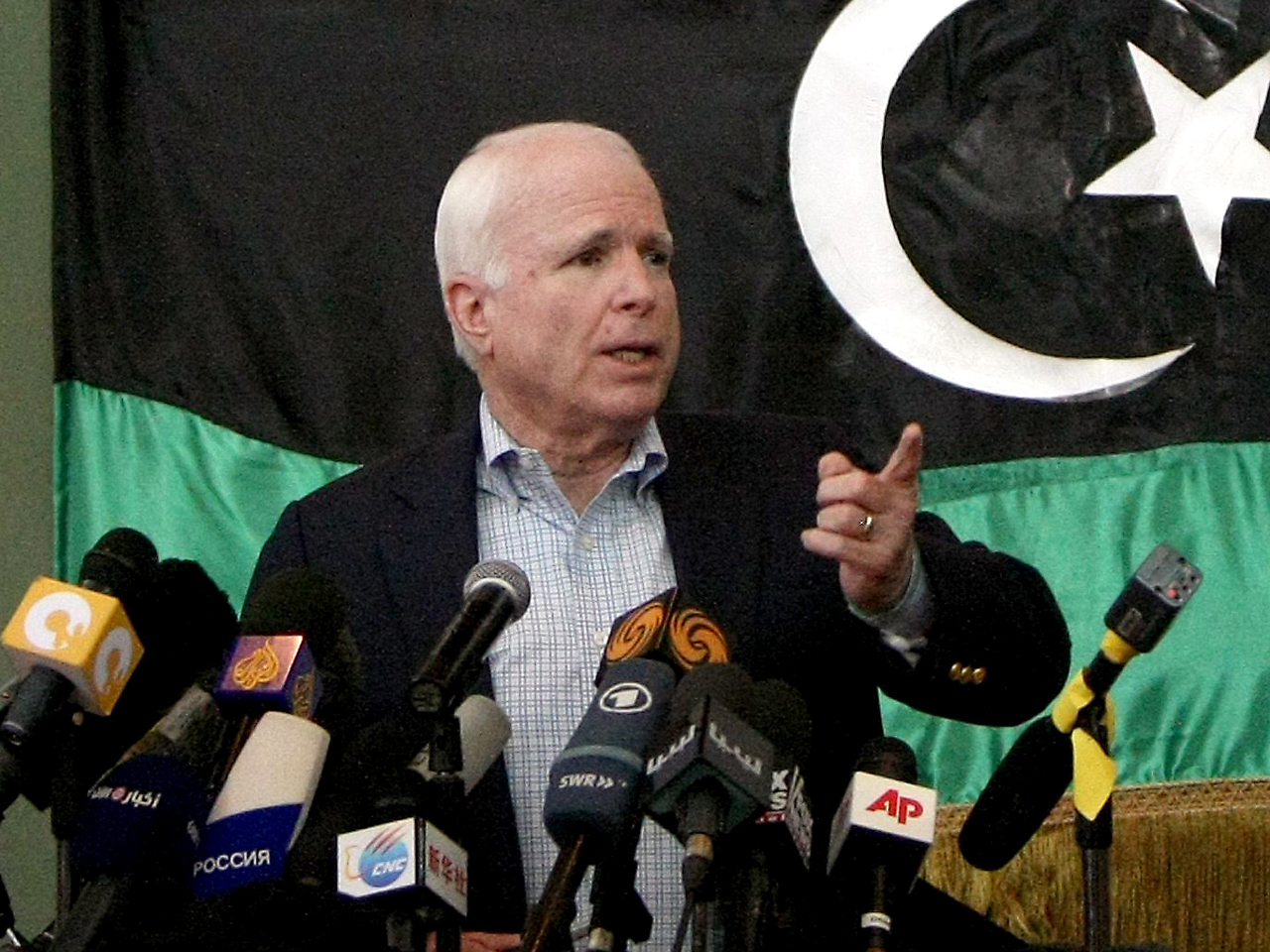 PARIS - U.S. Senator John McCain says that a military intervention in Syria would be risky and might not stop leader Bashar Assad's violent crackdown on opponents.

McCain says that in Syria, however, "I don't see a way that we could intervene militarily."

In an interview on France-24 television Thursday, he said, "I think it would be very risky and I don't know if we could stop the terrible ... behavior of Bashar Assad."

McCain, on a visit to Paris this week, urged sanctions and pressure by the U.N. Security Council.

The Obama administration has tread cautiously in it's stance on Assad -- concerned about what Syria might look like without him in charge, but forced to voice vehement opposition to the brutal crackdown. The White House is considering new "targeted sanctions" against Syria as part of "a range of possible policy options".

More than 450 people have been killed across Syria in the crackdown.

The Security Council, however, failed in meetings Wednesday to unite on a stance against the Assad government's aggression. Opposition from China, Lebanon and Russia -- which warned foreign intervention could spark a brutal civil war -- blocked a unanimous statement from the Council.

CBS News foreign affairs analyst Pamela Falk reports that, anticipating a lack of consensus, nations used an open session of the Security Council on Wednesday to vent their frustration over the impasse.

Susan Rice, the U.S. Ambassador to the U.N., called on Syria's president to change course immediately. She said the United States condemns in the strongest possible terms the abhorrent violence by Bashar al-Assad's government against its own people.

"We also call upon the international community to respond to this brutal crackdown, and to hold accountable those who are perpetrating these gross human rights violations," Rice said.

Assad was dealt an apparent diplomatic blow Thursday, however, and from within his own borders.

A human rights activist in Syria said more than 200 members had quit the ruling Baath party in the southern province at the epicenter of the country's uprising against Assad's brutal crackdown on opponents.

Mustafa Osso said another 30 resigned in the coastal city of Banias.

A resident of the city of Daraa said on Thursday that most of the resignations came from Baath party members in the town of Inkhil. He spoke on condition of anonymity, fearing reprisals.

Assad has tried to crush the revolt -- the gravest challenge to his family's 40-year ruling dynasty.