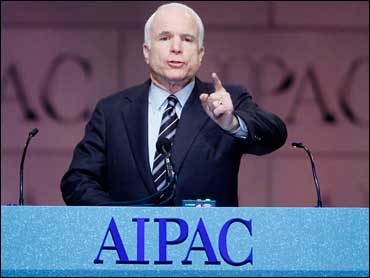 Republican John McCain raised the specter of a nuclear Iran in a speech to a pro-Israel group, once again chastising Democrat Barack Obama for his willingness to meet with leaders of Iran and other U.S. foes.

McCain has criticized Obama for saying in a debate last year that he would meet leaders of Iran and other U.S. foes without preconditions. The Arizona senator argues Obama is naive and inexperienced to think that such a meeting would yield progress.

"It's hard to see what such a summit with President (Mahmoud) Ahmadinejad would actually gain, except an earful of anti-Semitic rants, and a worldwide audience for a man who denies one Holocaust and talks before frenzied crowds about starting another," McCain told the American Israel Public Affairs Committee.

He criticized Obama for seeming to suggest that Iran is trying to develop a nuclear program because the U.S. refuses to engage in presidential-level talks. McCain said the Clinton administration in particular tried to engage Iran for two years, even lifting some sanctions, to no avail.

"Even so, we hear talk of a meeting with the Iranian leadership offered up as if it were some sudden inspiration, a bold new idea that somehow nobody has ever thought of before," McCain said as dozens in the audience laughed.

His campaign said he was referring to Obama's comments in an interview last month with Fox News: "Iran is stronger now than when George Bush took office. And the fact that we have not talked to them means that they have been developing nuclear weapons, funding Hamas, funding Hezbollah. We have had no impact whatsoever as we pursue our policies."

Obama's campaign said Monday that McCain supports an Iraq war that has made the U.S. and Israel less secure.

"He promises to continue a war in Iraq that has emboldened Iran and strengthened its hand," Obama spokesman Hari Sevugan said. "He promises sanctions that the Bush administration has been unable to persuade the (United Nations) Security Council to deliver."

Obama is also scheduled to address the AIPAC conference on Wednesday.

Two-thirds of people said they believe it would be a good idea for the president to meet with the leaders of enemy countries, according to a Gallup poll released Monday. About six in 10 favor the president meeting specifically with the leader of Iran, including most Democrats and independents and about half of Republicans, according to the survey, which was taken May 19-22.

In his speech, McCain called for measures aimed at increasing pressure on Iran, such as severely limiting Iranian imports of gasoline, targeted sanctions such as denying visas and freezing assets and a worldwide campaign to divest from companies doing business with Iran.

McCain called for financial sanctions on the Central Bank of Iran, which he said aids in terrorism and weapons proliferation, and he criticized Obama for opposing a measure to designate Iran's Revolutionary Guard as a terrorist organization responsible for killing U.S. troops in Iraq.

McCain has warm relations with the group, which is influential in the Jewish community. His call for sanctions against gasoline imports is a priority that AIPAC's members plan to lobby for on Capitol Hill later in the week.

In contrast, Obama has worked to reassure Jewish voters who have expressed some unease about his candidacy.

"I welcome the Muslim world's accurate perception that I am interested in opening up dialogue and interested in moving away from the unilateral policies of George Bush, but nobody should mistake that for a softer stance when it comes to terrorism or when it comes to protecting Israel's security or making sure that the alliance is strong and firm," Obama said in an interview last month with The Atlantic magazine. "You will not see, under my presidency, any slackening in commitment to Israel's security."