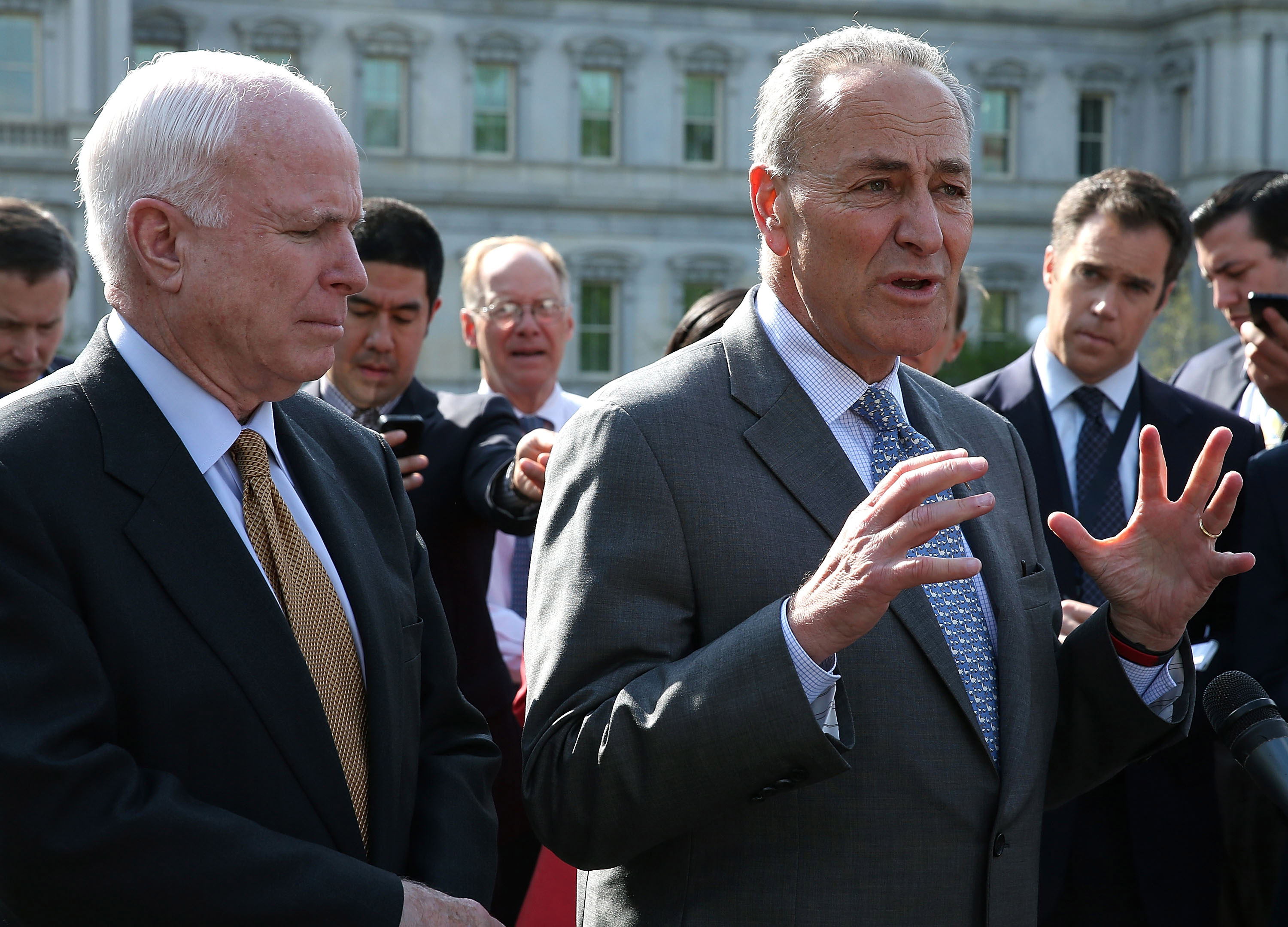 With the support of President Obama, the bipartisan group of senators working on comprehensive immigration reform are hoping to pass their legislation by June, Sen. Chuck Schumer, D-N.Y., said Tuesday afternoon.

Schumer and Sen. John McCain, R-Ariz., two of the eight senators who helped craft the bill, met with Mr. Obama at the White House today to discuss their legislation. The president was "enthusiastic" about the bill, even though he doesn't support every aspect of it, Schumer said.

"He doesn't want to drag this out because that's the way bills get killed," Schumer said.

The group aims on introducing the legislation in the Senate on Tuesday night and beginning hearings in the Senate Judiciary Committee on Friday. Over the next few weeks, other committees will hold their own hearings to consider the legislation. They hope on having the bill on the Senate floor by late May or early June, Schumer said -- at which point it would move to the House.

"I'm confident at the end of the day we will have a bill at the president's desk," McCain said after their meeting with the president.

One of the key elements of the legislation that Mr. Obama disagrees with is the inclusion of a "trigger" for creating a pathway to citizenship for the undocumented immigrants in the country. As the legislation is drafted, that pathway won't open up until the government demonstrates progress on the other three central portions of the immigration reform bill - border security, employer verification, and the "entry-exit" system to track visa holders.

Schumer said they included the trigger because "it was the right thing to do." Furthermore, he said the legislation wouldn't win support in the Senate, House or among the public, "if they're not going to be assured there's not going to be another wave of immigration."

In a statement after Tuesday's meeting, Mr. Obama acknowledge that "this bill is clearly a compromise, and no one will get everything they wanted, including me." However, he added, the bill "is largely consistent with the principles that I have repeatedly laid out for comprehensive reform... I urge the Senate to quickly move this bill forward and, as I told Senators Schumer and McCain, I stand willing to do whatever it takes to make sure that comprehensive immigration reform becomes a reality as soon as possible."

Schumer said that Mr. Obama's level of support "is sort of just the right place to be" because it will encourage others to compromise.

The senator noted the several constituency groups that support the bill, including business groups and organized labor, the high-tech industry and religious organizations. "We have a lot of broad support that was not there in 2007," Schumer said, referring to the Congress' last failed effort at comprehensive immigration reform.

McCain added, "The attitude of the American people has changed since 2007... Most Americans support this proposal far more than did in 2007. Frankly, elections have had an impact as well."

The bill, of course, still faces major challenges. One immigration reform opponent, Rep. Steve King, R-Iowa, said Congress should reconsider its efforts in light of the groundless speculation that the Boston Marathon bombings may have been the work of a foreign national.

McCain responded Tuesday, "I would argue passage of comprehensive immigration will enhance our ability to keep our country secure," citing various parts of the bill, including one that would require documentation from those entering and exiting the country.