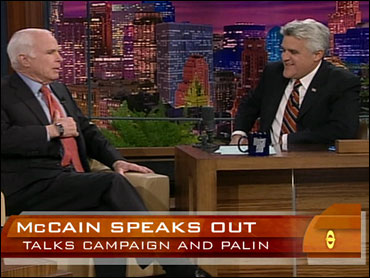 In his first interview since conceding the presidential election, John McCain said Tuesday that Sarah Palin did not damage his presidential bid and he dismissed anonymous criticism aimed at her following their crushing defeat.

"I'm so proud of her and I'm very grateful she agreed to run with me. She inspired people, she still does," McCain told Jay Leno during a "Tonight Show" interview taped for broadcast Tuesday night. "I couldn't be happier with Sarah Palin."

In an interview that mingled flashes of humor with political analysis, McCain did little to deflect responsibility from himself. He alluded to the difficult political environment for Republicans nationwide and conceded, "I could tell you a lot of things that we may have made mistakes on." He never listed them.

Asked by Leno to address griping about Palin from unidentified McCain operatives in the days following the election, the Arizona senator said, "These things happen in campaigns.

"I think I have at least a thousand, quote, top advisers," he scoffed. "A top adviser said? ... I've never even heard of ... a top adviser or a high-ranking Republican official."

However, McCain never directly addressed the embarrassing controversy over Palin's expensive campaign wardrobe purchased by the Republican National Committee, or statements by unidentified McCain aides who have reportedly said she was not prepared on foreign policy or other issues. The Alaska governor has said in interviews she did not ask for, or want, the $150,000-plus wardrobe for her and her family.

McCain also disputed that a different vice presidential pick would have changed the outcome against Democrats Barack Obama and Joe Biden. And when asked if Palin drifted off the campaign's message, he responded, "Did you expect mavericks to stay on message?"

At campaign rallies "the people were very excited and inspired by her. That's what really mattered, I think," McCain said. "She's a great reformer."

McCain's appearance at Leno's Burbank studio was scheduled to coincide with Veterans Day. It was the former naval aviator's 14th appearance on the show but his first TV interview as a vanquished presidential candidate.

While shielding Palin from blame, McCain also steered around a suggestion that skewed media coverage tilted the election toward Obama. "One thing I think Americans don't want is a sore loser," he said.

"I knew I had a headwind. I can read the polls," he said, in an obvious reference to a political climate soured by an economic crisis, an unpopular Republican president and war.

What's this say about the GOP brand?

The "party has a lot of work to do. We just got back from the woodshed," he said.

On a day when McCain reflected on his loss, Palin talked about the future.

In a series of national TV interviews, Palin attributed the ticket's defeat to the troubled economy and Bush administration policies and indirectly put her name in play as a possible future presidential candidate.

What about another campaign for McCain, who will be 76 years old in 2012?

"I wouldn't think so," McCain told Leno, with a hint of resignation in his voice. "We are going to have another generation of leaders come along."

DOJ employees push for leave for federal workers traveling for abortions
Thanks for reading CBS NEWS.
Create your free account or log in
for more features.
View CBS News In
CBS News App Open
Chrome Safari Continue
Be the first to know
Get browser notifications for breaking news, live events, and exclusive reporting.