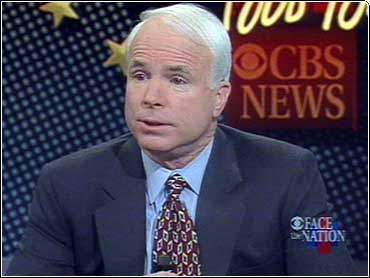 "Your campaign was sailing along and then all of a sudden someone accuses you of writing a letter to the F.C.C. settling a case that involves one of your major contributors," he said.

" You said you were doing what any committee chairman would do but both the Washington Post and New York Times have editorialized and said you should have known better what this would look like. Is there anything else you can do to get the focus back on what you want to talk about?"

McCain was equally forthright, though not without humor. "This particular controversy is better than being asked whether I'm nuts or not, which was the subject last time I was on this program," he said. "Today we are asking the federal government to release all correspondence I've had with any government agency I believe that the record will be clear."

Schieffer sought clarity. "If I understand what you said, you're going to ask all federal agencies to release every letter that you've ever written to them on any subject."

"I'm not sure we should force them to go back more than about ten years, but yeah, just to make sure that people know there is a clear pattern of my acting on behalf of my constituents and the consumers,..." said McCain. "Perhaps the most important bureaucracy now is the F.C.C., because of telecommunication's importance to our economy. They have been incredibly slow in making decisions which will help the consumers."

And the senator minimized the importance of the dustup. "Look, these things happen in campaigns. It's intense. There will be other 'bumps in the road.' This ain't beanbag we're playing."

"You're confident you haven't written a letter in the last 10 years that would be seen as anything improper?" Schieffer asked.

Campaigning in South Carolina Saturday, McCain argued that all the letters he's sent to federal regulators on behalf of big donors to his political campaign were aimed at protecting consumers.

It is the appearance of intervening for donors that's causing the Republican campaign finance reform maverick trouble in his bid for the White House. Meanwhile, the strong wording in the letters may raise another question that has dogged McCain.

When asked if the way he put things to the Federal Communications Commission is an example of his temperament, McCain answered, "I think it's really is more indicative that I'd written a month earlier, and I'm the chairman of the committee, and they hadn't even bothered to respond." So was he upset? "Well," he explains, "I thought they really ought to respond to the letter, at least."

McCain campaign advisors say that they think they "can weather this storm," buadmit it has turned into a frustrating distraction - making it very difficult to talk about central issues like taxes and campaign finance reform.