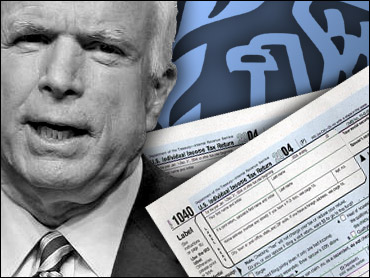 Republican presidential candidate John McCain earned a total of $405,409 last year and donated a quarter of it to charity, according to tax returns that provide only a partial picture of his family's enormous wealth.

His 2007 individual tax filing does not account for his wife's estimated worth of $100 million.

McCain and his wife, Cindy, have kept their finances separate throughout their 27-year marriage, and long have filed their taxes individually.

The Arizona senator routinely is ranked among the richest in Congress. But a prenuptial agreement has kept most of the family's assets in the name of his wife, an heiress to a Phoenix-based beer distributing company.

Released Friday, McCain's return indicated that he paid $84,460 in taxes on taxable income of $258,800. He gave $105,467 to charitable organizations, most of which went to the John and Cindy McCain Family Foundation. The foundation then distributed much of the money to charities. The donations include royalties from five of his books, including the biographical "Faith of My Fathers" and "Worth the Fighting For."

McCain reported paying $136,572 in wages to household employees in 2007. Aides say the McCains employ a caretaker for a cabin in Sedona, Ariz., child care for their teenage daughter, and a personal assistant for Cindy McCain.

Aides say she will not release her tax returns to protect the privacy of the couple's four children; details of their wealth are included in her filing.

Because Arizona is a community property state, McCain and his wife each must report one-half of their shared income and expenses. So, though McCain reported $258,800 in taxable income on his 2007 return, the couple's joint taxable income was twice that amount. According to the returns, Cindy McCain's income from the beer distributorship, Hensley & Company, was $432,991 in 2007.

Earlier this week, Democratic presidential hopeful Barack Obama and his wife, Michelle, reported making $4.2 million last year. That was a significant jump in their income from the previous year. Profits from his books "Dreams From My Father" and "The Audacity of Hope" accounted for some $4 million. The Obamas paid federal taxes of $1.4 million and donated $240,370 to charity.

By comparison, Hillary Rodham Clinton and her husband Bill, the former president, reported $20.4 million in income for 2007 but have asked for an extension on filing their returns. Almost half the former first couple's money came from Bill Clinton's speeches. The Clintons have made nearly $109 million since leaving the White House in 2001, capitalizing on lucrative business ventures and his speaking engagements.