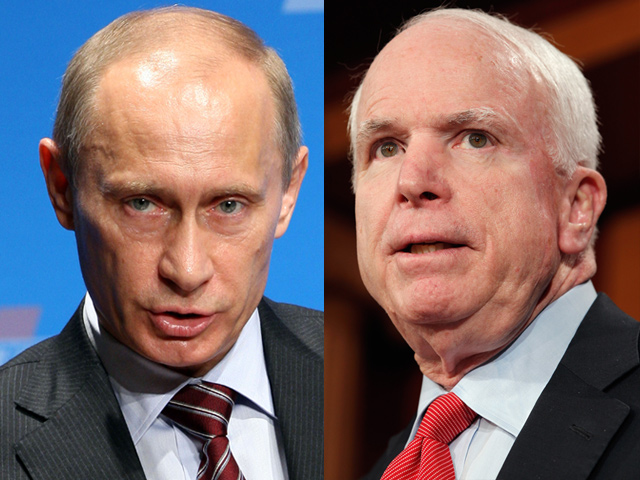 After 10 years as President of Russia, Vladimir Putin stepped aside and became prime minister. But now, he's running again for his old job, and political barbs are coming his way - some from across the Atlantic.

Sen. John McCain (R, Ariz.) has been needling the Russian leader via Twitter. And Thursday, Putin struck back.

But McCain took it a step further -- taking shots at Putin, alluding to massive anti-Putin protests in Russia.

McCain admits he picked a fight with the embattled prime minister.

He tweeted last week, "Dear Vlad, #The ArabSpring is coming to a neighborhood near you."

McCain admits he giggled when he sent the tweet. "You know," he says, "you've gotta have a sense of humor!"

The former GOP presidential nominee says he expected a reaction, but not the bizarre personal attacks Putin delivered Thursday on Russian TV.

"Mr. McCain was imprisoned in Vietnam," Putin said. "They put him in a hole for several years. Anyone would go insane."

Back on Twitter, McCain played it coy, saying, "Dear Vlad, is it something I said?"

"I just think it's a little strange," says McCain, "that, obviously, the leader of one of the world's largest and most powerful countries would worry about what John McCain has to say. I have a pretty high opinion of myself, but not quite that level!"

Both the Obama and Bush administrations have had policies to "reset" ties between the U.S. and Russia.

President Bush famously said he found Putin to be "trustworthy" when he "looked the man in the eye" and got a "sense of his soul."

McCain's view is quite different, as he spelled out during his 2008 run for president.

"The only thing I saw when I looked into his eyes," he observed, "were three letters: K, G and B."

McCain accuses Putin of corruption during his long rule, and believes he'll ultimately have to reform - or get out of the way.

"You know," McCain observes, "this is in some ways amusing, but also, I think it's an indication that he's deeply concerned about these demonstrations."

When asked for comment, the Russian embassy would only say, "The Prime Minister spoke on TV. We will not be saying anything more."

Top 10 cities in U.S. for single moms to live