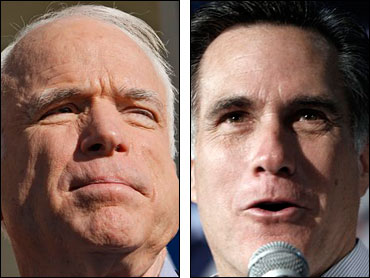 This column was written by Stephen F. Hayes.

At a rally in Tampa, Florida, yesterday morning, Ann Romney introduced her husband. The comments seemed perfunctory at the time, but they now sound oddly hopeful.

"In every situation," she said, "Mitt has pulled out the impossible."

John McCain won Florida with a margin of 36 percent to 31 percent on Tuesday. If Mitt Romney is to win the 22-state primary a week from now, he will need to "pull out the impossible."

As he tries, the Republican presidential nomination could get very ugly. Romney's strategy, according to a report from Fox News Channel's Bill Hemmer last night, is to target McCain's strengths: character and integrity. The Romney campaign may continue to make the case that McCain has been running so long he is near-obsessed with becoming president, a fixation that has led him to conduct his campaign in a dishonorable fashion.

We saw this previewed on Monday and over the weekend. "I think Senator McCain is willing to say anything he has to say to get elected," Romney said. His campaign points to McCain criticism of Romney on Iraq last week, when McCain said that his opponent wanted secret timetables for a withdrawal from Iraq. Several news organizations and many conservatives characterized McCain's attack as "a low blow" or "dirty," though the Romney comments in question can certainly be read the way McCain portrayed them.

McCain's team is happy to have that debate again.

Moments after McCain's victory speech here last night, I asked a jubilant Lindsey Graham about the possible Romney strategy and Romney's positions on Iraq. Graham pointed specifically to comments Romney made in a December 2006 interview with Human Events, in which Romney refused to take a position on the recently-proposed troop surge. "I'm not going to weigh in. I'm still a governor. I'm not running for national office at this stage."

It was a less-than-courageous position and more than a bit disingenuous. Romney had participated in specific briefings on Iraq by the architects of the surge and had done virtually everything but formally announce his candidacy.

"I welcome this debate," Graham said last night, as former CIA Director Jim Woolsey gave him a hug. "We had just lost badly in the congressional elections in November and Romney and many other Republicans were running for the exits. He was afraid to embrace the surge because Republicans were terrified after that. John was thinking about the nation, not the next election. So if they want to have a debate about where he was at and what he said, bring it on."

McCain advisers also expect Romney to hit their candidate hard on immigration, particularly in California and the south, resurrecting their earlier charges that McCain was not a conservative and was effectively pro-amnesty. But McCain is prepared to fight back hard. "Romney wants amnesty for every position he's held since 2006, when he became a fake conservative to run for president," says McCain adviser Steve Schmidt. "What conservatives should understand is the David Souter principle. Caveat Emptor. When someone is willing to change positions for political expediency it makes you wonder: If he's ever elected to the White House will he shed the conservative cloak that he's trying to wear?"

It is also possible, now that the loss last night has settled in, that Romney will avoid intensifying his attacks on McCain. The electoral map does not look inviting to Romney at this point and that reality, and his desire for a political future, may well influence Romney's decision-making in the coming days.

So where does all of this leave John McCain with his conservative critics if, as seems increasingly certain, he is the Republican nominee? Will it be possible to bring about some sort of rapprochement?

I asked McCain about this on his campaign bus on Sunday. Our conversation assumed a win in Florida, and McCain's language suggests that he viewed a victory here as decisive. After I expressed some surprise that he had not lashed out at his conservative critics, McCain said that he no longer takes politics as personally as he once did.

"The important point, Steve, is to look ahead. I know that there are people who still have differences with me," he said, pausing a moment to reflect further. "What I really believe I can do is recognize that we now have a common opponent [Democrats] and we've all got to unite the party. And we not only have to unite the party but we have to reenergize it. Look at these vote counts in these primaries. Democrats' turnout, as you well know, is larger than Republicans. If we've got to reenergize the party, this is not the time to have fights with each other."

So I asked him about reaching out to somebody like Rush Limbaugh and whether he'd pick up the phone and say let's have a talk?

"No, but I would certainly be receptive to communications with anyone. But I wouldn't select Rush Limbaugh or anybody. I would just say, look, it's time we all united and hopefully everybody will get on board. But I don't think that I would pick up the phone and call any particular individual. How can we win if we are divided?"
By Stephen F. Hayes
©