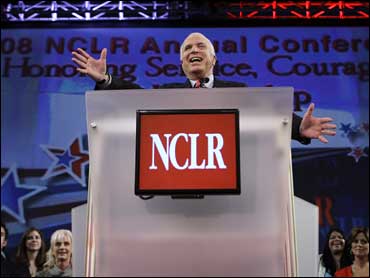 Barack Obama and John McCain have acknowledged Latino voters -- especially in swing states -- could decide the presidential election. CBS News Early Show co-anchor Maggie Rodriguez hosted a luncheon on Monday where McCain addressed thousands of Latinos, and then later asked him specifically on the New Yorker cover with a cartoon of Barack and Michelle Obama, immigration and other issues.


Rodriguez: I want to ask you a news of day question, if I may…

Rodriguez: Have you seen the cover of the New Yorker?

Rodriguez: Your feeling. Is satire acceptable?

McCain: I don't think so. I'll leave that judgment to the American people. I can only state my personal opinion… if it's an attempt at satire, it's wrong. It's wrong and it's offensive

Rodriguez: With regard to Fannie Mae and Freddie Mac, do you feel a government bailout is the solution?

McCain: I think the proposal that has been made, I don't call it quote bailout though it certainly is significant assistance in a number of ways, is an appropriate measure to take. Americans are angry, they are angry and upset. They're sick and tired of Washington doing nothing for them.

Rodriguez: How much blame should the Bush administration take for that?

McCain: I think that the problem has been festering for many many many years. Fannie and Freddie were not created by the Bush administration. Look at some of the Congressional action, lack of oversight by the administration, by Congress, by everybody, it's a failure that's there plenty of blame to go around.

Maggie Rodriguez: You championed a comprehensive immigration reform bill that now as the nominee you wouldn't even vote for if it came up today. Why not?

McCain: The American people didn't support - I still believe that we reflect the views of the majority.

Rodriguez: Some political analysts say, and in fact Senator Obama made the comments here yesterday that when you became the nominee, you could no longer risk alienating your conservative base, you started emphasizing border security over a path to citizenship for undocumented immigrants.

McCain: Actually as soon as we failed, I said that we obviously had for the second time - I led on the issue.

Senator Obama supported measures which would have killed the comprehensive approach

Rodriguez: What do you say to the American worker who feels the undocumented worker are taking his or job?

McCain: I agree with them. But I would also point out there are jobs it is clear that still need to be filled.

Americans want the confidence that we'll have secure borders and then I believe the overwhelming majority of them will support a humane and compassionate approach to temporary worker program and to comprehensive immigration reform.

Rodriguez: But securing the border could take years. What if it never happens? When will you get to comprehensive immigration reform?

McCain: We are moving forward right now with securing our borders.

Rodriguez: If in one year or two years the border isn't secure, what will you do?

McCain: It will be secure.

Rodriguez: It will be secure?

McCain: It will be done in a very short period of time

Click below to watch Maggie Rodriguez's interview with John McCain.