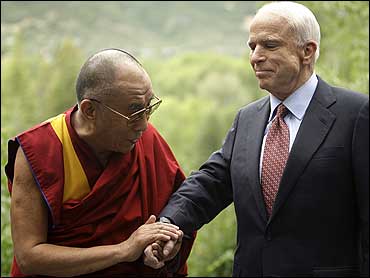 Republican presidential candidate John McCain on Friday called on China to release Tibetan prisoners as he met with the Dalai Lama.

After a 45-minute meeting with the Dalai Lama, McCain said the Beijing Olympic Games in August provide an opportunity for China to demonstrate it recognizes human rights. He also said the Dalai Lama is merely seeking basic rights to preserve Tibetan culture, language and religion.

"That's why I'm so disappointed by repeated statements by Chinese officials that ascribe to the Dalai Lama views and actions divorced from what he actually represents. Such rhetoric doesn't serve a cause of peaceful change and reconciliation," McCain said.

"I urge the Chinese government to release Tibetan political prisoners, account for Tibetans who have, quote, 'disappeared' since protests in March, and engage in meaningful dialogue on genuine autonomy for Tibet," McCain said.

The Tibetan spiritual leader was in Aspen for a symposium sponsored by The Aspen Institute think tank. McCain met with him while his rival, Democrat Barack Obama, was on high-profile trip through Europe and the Middle East.

The Dalai Lama praised McCain for his concern, but he emphasized he wasn't endorsing McCain's presidential bid.

The Dalai Lama is seeking support from world leaders for upcoming talks with China once the Olympics are over. He says he wants autonomy, not independence, for Tibet.

China claims Tibet has been its territory for centuries.

"His Holiness represents the profound desire of millions of Tibetans for basic dignity and human rights. His nonviolence approach and his lifelong work seeking common ground across cultural and religious divides are an inspiration to all of mankind and to millions of Americans," McCain said as the Dalai Lama clutched McCain's hands.