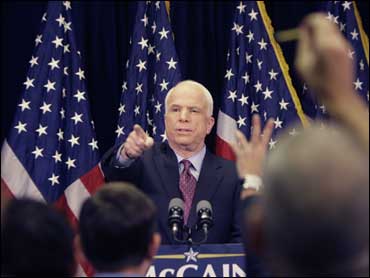 Sen. John McCain said Monday the federal moratorium on offshore oil and gas drilling should be lifted, and individual states given the right to pursue energy exploration in waters near their own coasts.

With gasoline prices rising and the United States chronically dependent on foreign oil, the Republican presidential contender said his proposal would "be very helpful in the short term resolving our energy crisis."

McCain also suggested giving the states incentives, including a greater share of royalties paid by companies that drill for oil, as an incentive to permit exploration.

Asked how far offshore states should be given control of drilling rights, he said that was a matter for negotiation.

He offered no other details for his proposal, which he is expected to describe more fully on Tuesday in an energy speech.

The current drilling moratorium is a perennial cause for controversy, pitting those who favor additional exploration on the one hand against environmentalists on the other.

The current ban on offshore drilling covers an estimated 80 percent of U.S. coastal waters. Given Democratic opposition in Congress to ending it, the Bush administration and congressional Republicans have been seeking the type of state option that McCain endorsed.

The GOP presidential candidate said a recent run-up in the price of oil was having an adverse effect on consumers.

"We've seen the impact of it in the form of food prices, in the form of gasoline, in the form of threats of inflation and indeed indications of inflation, and we must we must embark on a national mission to eliminate our dependence on foreign oil," he told reporters. McCain has sought to carve out something of a middle road on energy issues, parting company with many Republicans by opposing drilling in the Arctic National Wildlife Refuge in Alaska, for example and calling for measures to reduce greenhouse gases.

The Senate last month rejected a GOP energy plan, 56-42, that included a provision similar to McCain's proposal. It would have allowed a state's governor to petition to have the federal moratorium lifted for waters off its coast. Republican senators argued there are some 14 billion barrels of recoverable oil available in waters now off limits. Also, the House has twice approved giving states the right to opt out of the federal ban, both when the GOP held the majority, but the proposal has never made it through the Senate.

McCain made his remarks before leaving the Washington area for a pair of fundraisers in Dallas.

Another fundraising event, originally set for the home of Clayton Williams in Midland, Texas was pulled from the schedule after a controversy erupted over remarks the 1990 Texas GOP gubernatorial candidate made several years ago about rape.

McCain sought to minimize the fallout, telling reporters that his aides had not known of the earlier comment when they scheduled the event

"We'll do it someplace else and I understand he's not attending. That's pretty much the sum of it all," he said.

He said he would hold another fundraising in the Midland area later this summer and Williams would not attend. Democrats have called on McCain to return more than $300,000 that Williams had raised for McCain from other individuals.
By David Espo