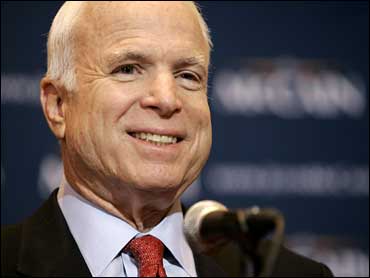 John McCain accused Democratic presidential rival Barack Obama of engaging in Washington doublespeak over accepting public financing for the general election as the likely GOP nominee tried to turn a money issue into a character test.

"We either keep our word or we don't keep our word. I intend to keep my word to the American people," McCain said Wednesday, pressing the line of criticism anew a day after delivering a blistering critique of the Illinois senator as both won their party primaries in Wisconsin.

"I think the American people would expect him to hold to that commitment, especially if we want to bring about change," McCain added.

In an opinion piece published in USA Today on Wednesday morning, Obama wrote that he wants to work toward a spending agreement with the Republican Party's nominee.

"I propose a meaningful agreement in good faith that results in real spending limits," Obama wrote. He laid out a series of conditions, including, perhaps, limiting how much money McCain can spend for the general election while the race for the Democratic nomination continues.

Obama's spokesman, Bill Burton, hit back: "John McCain is in no place to question anyone on pledges when he abandoned the latest campaign finance reform efforts in order to run for the Republican nomination and went back on his commitment to take public financing for the primary election this year."

As Obama has lengthened his lead in the Democratic race, McCain has increasingly taken the one-term Illinois senator to task.

McCain, a four-term senator has started raising questions about Obama's experience level, seeming lack of foreign policy credentials, and, now, his character. In that process, McCain is espousing some arguments similar to those made by Hillary Rodham Clinton against Obama.

Obama's campaign, in turn, has started responding in force to the GOP's nominee-in-waiting.

McCain, for his part, went on offense by again raising the spat over taxpayer financing of the general election. McCain clearly sought to raise a larger question: If Obama doesn't keep a promise on this issue, how can the public trust what he says he'll do in the White House?

A year ago, both McCain and Obama indicated that they would accept public financing for the general election if the other party's nominee did as well.

But Obama, whose fundraising has brought in record amounts of primary money, has hedged that position over the past week, giving McCain openings to pounce.

Last week, Obama said it would be "presumptuous of me to say now that I'm locking myself into something when I don't even know if the other side is going to agree to it."

McCain gave Clinton a pass on the issue, given that she never indicated she would forgo public financing.

A leading advocate of limits on campaign finances, McCain is turning down government matching funds for the primary to free himself to spend more money as he prepares for a general election contest.

As for accepting public money for the general election, McCain said: "I obviously would have to reevaluate if Sen. Obama or Sen. Clinton does not make that commitment."

Each major party candidate could get about $85 million in public funds for the general election, but they would not be allowed to raise any other money. Such a step would clearly give the advantage to McCain, who dislikes fundraising, and would hinder Obama and his widespread fundraising apparatus. Obama's campaign has said it raised a whopping $32 million in January.

Both candidates would have to rely on outside groups and on the national parties to supplement their spending if they accepted public financing. The Republican National Committee has been the only national GOP organization to out-raise its Democratic counterpart. But political finance experts say Obama, if he's the nominee, could significantly buttress the Democratic National Committee's fundraising.