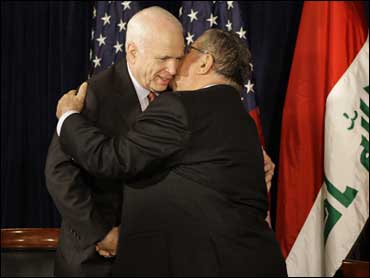 Appearing together in solidarity, Republican John McCain and Iraq's president said Saturday that the war-ravaged country is making significant but fragile progress.

The GOP presidential nominee-in-waiting expressed confidence about prospects for the two countries completing a complex agreement that would keep U.S. troops in Iraq after a U.N. mandate expires at year-end. And, Iraqi President Jalal Talabani said an American military presence still was needed.

"I, of, course am encouraged. We both agree that the progress has been significant but the progress is also fragile. And there's a lot of work that needs to be done," McCain said at the end of a private meeting with Talabani.

Sitting next to the Arizona senator at a Washington hotel, Talabani nodded in agreement and said it was a pleasure and an honor to update an "old friend" about "this stage of success" in Iraq.

U.S. and Iraqi authorities are trying to meet a July target date for completing a security agreement. Talks bogged down over several key issues, which Iraqi lawmakers said violated the nation's sovereignty. Recently, however, Iraqi authorities said prospects for a deal had brightened after the Americans submitted new, unspecified proposals.

Talabani discussed the issue with President Bush on Wednesday.

Hunter Biden responds to critics of the prices of his art: "Other than f**k 'em?"

McCain emphasized that the two countries will decide the role of U.S. forces together.

Talabani, for his part, said his country has achieved "good successes and achievements" in training the Iraqi army and policy force.

But, he said: "We are still in need to have American military presence in Iraq, and it must be decided by both governments of the United States and Iraq how much they will remain there."

Talabani added: "In my personal opinion, we are in need to have some, at least some, military bases as a symbol for preventing" other countries from "interfering."

McCain has been a strong backer of the U.S.-led war in Iraq, saying that the United States is winning the battle against insurgents and shouldn't pull out now. His Democratic opponent, Barack Obama, opposes the war and has said as president he would begin to bring U.S. troops home.

(AP Photo/Manuel Balce Ceneta)
Earlier this morning, while addressing the National Association of Latino Elected and Appointed Officials (NALEO) Conference in Washington, McCain was interrupted by several hecklers (including one pictured at left) protesting the Iraq War and yelling, "Bring the troops home."

The protesters, some holding signs, were escorted out of the auditorium.