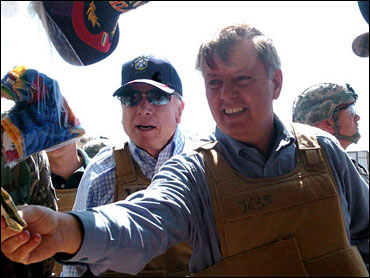 Republican presidential hopeful Sen. John McCain said he would have taken his tour of an Iraqi market last week even if he had not been accompanied by heavily armed U.S. soldiers.

McCain said he would have walked through a central Baghdad market without the military protection, but the top U.S. commander in Iraq, Gen. David Petraeus, had recommended the armed escort.

"I'm not notorious for being nervous about going anywhere," said McCain. "I'll gladly go almost anywhere in the world, under any circumstances, but I did respond and do what Gen. Petraeus asked me to do."

McCain and other members of a congressional delegation toured the market last week, traveling in armored military vehicles and wearing body armor during their hour-long excursion.

The congressional delegation said the trips were proof that security was improving in the capital.

Some Iraqis in Baghdad said McCain's account of the visit to the Shorja market did not represent the current reality in the capital. The market has been hit by several recent bombings, including one in February that killed 137 people.

On Sunday, McCain told 60 Minutes he "misspoke" when he told reporters that conditions in Baghdad had improved so much that Americans could now walk freely through parts of the capital.

But at a news conference Monday in Phoenix, McCain said he talked to many Iraqis in the market who told him that, while they still worried about a sniper operating there, they felt as though things were getting better.