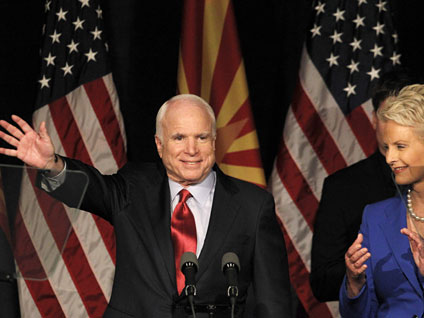 "I have to confess I think the Senate will be a much poorer place without Russ Feingold in it," McCain said. "I know that in my next term I will experience fewer occasions of inspiration because of the departure of Russ Feingold, a man whose courage and dedication to the principles that guided his Senate service often inspired me."

McCain went on to say that while he and Feingold often differed on issues, he believes that they held similar ideals about public service.

"We are of different parties, and our political views are often opposed," he said. "We've had many debates on many issues. But where we agreed - on wasteful spending, ethics reform, campaign finance reform and other issues - it was a privilege to fight alongside and not against Russ Feingold."

The two men worked together in 2002 on a campaign finance reform bill that angered many in McCain's party. Campaign spending has only increased as an issue since then, thanks in part to the Supreme Court's "Citizens United" decision that gutted the 2002 bill and the subsequent flood of anonymous spending into campaigns.

McCain in his remarks lauded Feingold for his 1998 refusal to use "soft money" contributions in his campaign despite coming close to losing his seat.

Feingold, who served in public office for three decades, did lose his seat this year, to Republican Ron Johnson. The New York Times reported that at least $4 million was spent in Wisconsin to back Johnson by donors from the outside groups that flourished in the wake of Citizens United. (It should be noted, however, that at least through mid-October, Feingold actually raised more money than Johnson.)

In his speech, McCain also alluded to the lack of bipartisanship in the Senate in recent months and years.

"We don't often hear anymore about members of Congress who distinguish themselves by having the courage of their convictions; who risk their personal interests for what they believe is in the public interest," he said. " I've seen many examples of it here, but the cynicism of our times - among the political class and the media and the voters tends to miss examples of political courage or dismiss them as probable frauds or, at best, exceptions that prove the rule."

Feingold's loss has led civil liberties activists to try to find a new champion in Congress. Feingold was the only senator to oppose the USA Patriot Act that was passed after the Sept. 11, 2001 terrorist attacks.

More recently, he has split with President Obama on a number of issues, from the expansion of the war in Afghanistan to the bank bailout of 2008. In addition, he was a strong supporter of the health care reform.

"We would all do well to keep his example in our minds as we serve our constituents and country and convictions. We couldn't have a better role model," McCain said. "I will try harder to become half the public servant he is. Because his friendship is an honor, and honors come with responsibilities."