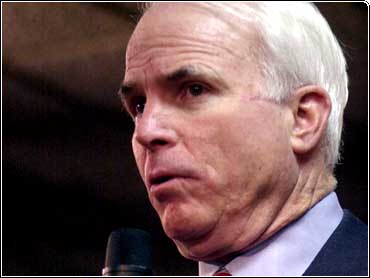 Running for president on a promise to rid the nation of big money politics, Sen. John McCain on Wednesday repeatedly denied trying to influence a federal agency by prodding it to approve a TV license request by one of his financial benefactors.

McCain said he did urge the Federal Communications Commission to make a decision on Paxson Communications' application for a license two years after the company submitted it. But he told reporters that he did not tell the FCC which way to vote and that he rightly pressed for a decision in his capacity as Senate Commerce Committee Chairman, not in exchange for the company's contributions or the use of its private jet.

"I didn't tell them to approve it; I told them to act," the Arizona senator said. "I think it's entirely appropriate." Late Wednesday, McCain cancelled a fund-raiser scheduled for this weekend that was to be held by Lowell "Bud" Paxson, saying it would be inappropriate.

The issue gave GOP front-runner George Bush a chance to criticize McCain for the second time in as many days as Republican contenders fought for advantage in this first-in-the-nation primary state.

"I think it's really important for people who are advocating reforms to live up to the spirit of reforms they are advocating," Bush, campaigning in Iowa, told reporters. Later, in Manchester, N.H., he said, "I respect John McCain" and acknowledged that "I haven't seen the facts." But he also said, "I think somebody who makes campaign financing an issue has got to be consistent and walk the walk."

McCain is chairman of the Commerce Committee, which oversees the FCC. He urged the agency in a Dec. 10 letter to act quickly on a matter involving Paxson Communications, a company that owns 73 family-oriented TV stations and has legally provided a private jet for McCain's use.

McCain's letter to FCC Chairman Bill Kennard, released by the campaign Wednesday, said: "The sole purpose of this request is to secure final action on a matter that has now been pending for over two years. ... I emphasize that my purpose is not to suggest in any way how you should vote -- merely that you vote."

McCain spokesman Dan Schnur said late Wednesday that there was no urgency to the senator's letter to the FCC, since Paxson could have simply reapplied if its application expired.

It is not unusual for members of Congress to send letters to the FCC about transactions that are under review. In fact, nine other lawmakers also sent inquiries to the commission about the Pittsburgh television station. Among those were Rep. John Dingell, D-Mich., Rep. Ed Markey, D-Mass., and a number of Pennsylvania lawmkers, including Republican Sen. Arlen Specter.

But the FCC's Kennard called McCain's request for information -- the last one received by the commission from a member of Congress "highly unusual." Kennard noted that the letter came at "a sensitive time in the deliberative process."

"I am concerned that inquiries concerning the individual deliberations of each commissioner could have procedural and substantive impacts on the commission's deliberations and thus on the due process rights of the parties," Kennard wrote in a Dec. 14 reply to McCain.

McCain's campaign released a fact sheet saying that the company's planes are available to all 535 members of Congress when they're not being used for the firm's business. It also said that 80 percent of U.S. business activity falls under Commerce Committee jurisdiction and "there is no evidence that John McCain has taken inappropriate action on behalf of a contributor."