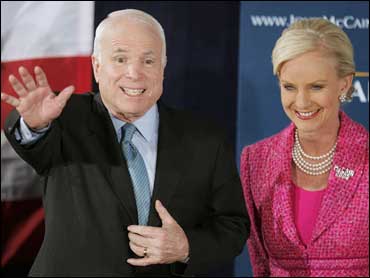 Republican presidential candidate John McCain said President Bush should veto a measure that would bar the CIA from using waterboarding and other harsh interrogation methods on terror suspects.

McCain voted against the bill, which would restrict the CIA to using only the 19 interrogation techniques listed in the Army field manual.

His vote was controversial because the manual prohibits waterboarding - a simulated drowning technique that McCain also opposes - yet McCain doesn't want the CIA bound by the manual and its prohibitions.

McCain, who was tortured as a prisoner of war in Vietnam, is well-known for his opposition to waterboarding, which puts him at odds with the Bush administration.

"I knew I would be criticized for it," McCain told reporters Wednesday in Ohio. "I think I can show my record is clear. I said there should be additional techniques allowed to other agencies of government as long as they were not" torture.

The legislation bars the CIA from using waterboarding, sensory deprivation or other harsh coercive methods to break a prisoner who refuses to answer questions. Those practices were banned by the military in 2006.

President Bush has threatened to veto the legislation, which cleared the House in December and won Senate approval last week.

One supporter of the bill, Sen. Chuck Schumer, D-N.Y., said last week that if Bush vetoes the measure, "he will be voting in favor of waterboarding."

If a president disagrees with legislation, he should veto it, McCain said. He said he disapproves that Bush sometimes signs legislation he dislikes, then issues critical "signing statements" outlining his objections.

McCain said he would never issue a critical signing statement: "If I disagree with a law that's passed, I'll veto it."

"I think if you disagree with a law, you have a constitutional right to veto that, authority to veto that," McCain said.