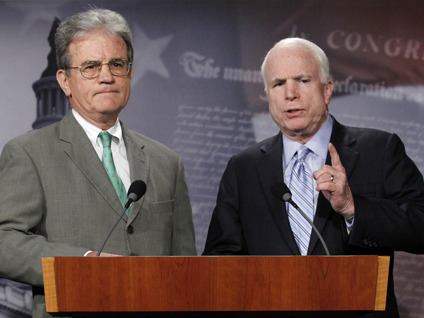 The American Recovery and Reinvestment Act "passed with assurances that it would stem the loss of American jobs and keep the economy from floundering," reads the introduction of the report, Summer Time Blues: 100 Stimulus Projects that Give Taxpayers the Blues during the Summer of Recovery." "As most can see, it hasn't."

The projects spotlighted represent just a tiny percentage of the more than 70,000 stimulus projects underway. Coburn said at a press conference, however, that the point of the report is to show that the stimulus is not getting Americans the "best bang for our buck." The program, he said, has raised the national debt while funding inappropriate projects.

"There is no question that this stimulus bill has had a positive effect on the economy to a certain degree, and what our criticism is, it could have had far greater effect," Coburn said.

The report highlights projects funded by the stimulus such as a water park in New York, research into whether yoga can reduce hot flashes, and a sidewalk in Boynton, Oklahoma that leads into a ditch.

"Of course the recipients of these taxpayer dollars will complain and justify the reason for receiving these funds," McCain said. "The question should be posed, how many jobs did this create? And obviously with these projects, little or none."

White House Spokesperson Liz Oxhorn said the Obama administration will review the claims of the report, but it is not prepared to immediately accept the conclusion that these projects were misguided.

"Senators McCain and Coburn have released error-laden Recovery Act reports in the past and we have no reason to expect any different with this one," Oxhorn said.

Furthermore, she said, "any misguided project is just a small fraction of tens of thousands coast to coast that are rebuilding America and putting people to work. For hard-hit middle class families, this isn't about partisan 'reports' or a single project - it's about a choice between returning to the failed policies of the past or building on solutions like the Recovery Act that are moving America forward."

"What's the price we have paid for future generations of Americans?" McCain said today. "A $1.1 trillion additional debt. That, in my view, overwhelmingly negates any positive effects that it may have had initially."