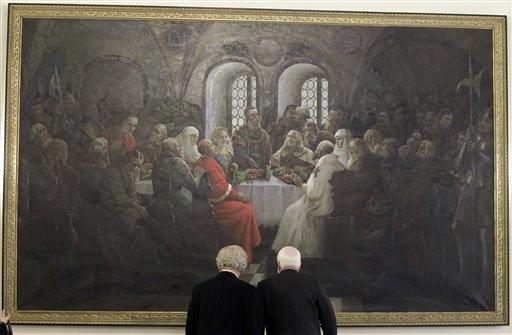 Speaking in Lithuania's parliament, McCain told a group of Belarusian students that "current events in the Middle East and Egypt are ... strong lessons that no government can keep people without God-given rights forever."

McCain and Lieberman are in Lithuania as part of a congressional visit to the Baltic state. The NATO member borders Belarus, a nation of 10 million that held widely disputed elections in December that kept strongman Lukashenko in power.

Lukashenko claimed 80 percent of the vote but independent observers rejected the election as flawed. After polls closed, the government jailed hundreds of dissidents, including seven of the nine presidential candidates who had challenged Lukashenko.

"Mr. Lukashenko is a ruthless, repressive and brutal tyrant on the wrong side of history," McCain said.

Lieberman called on Washington to take a tough stance against Lukashenko and suggested Europe could do more.

"I hope the United States will take the lead in imposing sanctions on the government and the leaders of the corrupt and dictatorial regime in Minsk," the Belarusian capital, he said.

The U.S. State Department has indicated it would impose sanctions on Belarus after its crackdown on the democratic opposition. More than 700 people were arrested, and many remain in jail. Some face sentences of up to 15 years in prison.

The European Union announced last week it would impose an asset freeze and visa ban on 156 top Belarusian officials. Lieberman, however, suggested Brussels not stop there.

"We appreciate the step that European Union took adopting visa ban, but we think it should go further, to economic sanctions on the energy companies within Belarus that fuel the regime to press its own people," Lieberman said.