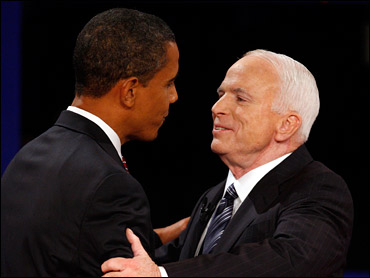 Republican candidate John McCain and Democrat Barack Obama slugged it out over the faltering U.S. economy, taxes, energy policy and character in their third and final presidential debate on Wednesday night.

McCain took an aggressive approach, but once again, neither man landed a knockout punch nor committed a major gaffe.

"John McCain turned in an energetic, focused and, at times, emotional performance," said CBSNews.com senior political editor Vaughn Ververs. "But he needed something more in order to change the underlying dynamics of this race. Obama was solid, on-message and mostly mistake free, likely stunting any major gains for the Republican. McCain may have righted the ship to some extent, but time is running out for him to make up ground." (Read Ververs' full analysis of the debate)

The crucial encounter began with an exchange on the economy. Both men said the $700 billion bailout was not enough.

McCain said Americans are hurting and they're angry. He said they are the innocent victims of greed on Wall Street. McCain said, "We've got to put the homeowners first."

Obama said what the nation hasn't seen yet is a rescue plan for the middle class. He said the top focus should be on jobs.

As the debate unfolded, McCain accused Obama of waging class warfare by advocating tax increases designed to "spread the wealth around." The Democrat denied it, and countered that he favors tax reductions for 95 percent of all Americans.

"Nobody likes taxes," Obama said in an exchange early in the third and final presidential debate of a campaign nearing its end. "But ultimately we've got to pay for the core investments" necessary for the economy.

"If nobody likes taxes, let's not raise anybody's, OK?" McCain retorted with a laugh. (Read the full debate transcript)

The 90-minute debate at Hofstra University focused on the economy and domestic policy. The candidates were seated at a table with moderator Bob Schieffer, CBS News' chief Washington correspondent.

McCain, eager to stress his differences with an unpopular president, also said he was disappointed that the Bush administration has not embraced his $300 billion proposal to renegotiate mortgagees so homeowners can remain in their homes.

Obama said he agreed the government must help homeowners trapped in the current economic crisis, but he said, "The way Sen. McCain has designed his plan, it could be a giveaway to banks."

The two men also traded charges that departed from the core issues of the economy, energy and taxes.

"One hundred percent, John, of your ads, 100 percent of them have been negative," Obama told his rival, seated only a few feet away at a round table.

"It is true," said Obama, seeking the last word.

McCain is currently running all negative ads, according to a study by the University of Wisconsin-Madison. But he has run a number of positive ads during the campaign.

Behind in the polls, McCain played the aggressor early and often.

He demanded to know the full extent of Obama's relationship with William Ayres, a 1960s-era terrorist, the Democrat's ties with ACORN, a liberal group accused of violating federal law as it seeks to register voters, and insisted Obama disavow last week's remarks by Rep. John Lewis, a Democrat, who accused the Republican ticket of playing racial politics along the same lines as segregationists of the past.

Obama returned each volley, and brushed aside McCain's claim to full political independence.

"If I've occasionally mistaken your policies for George Bush's policies, it's because on the core economic issues that matter to the American people - on tax policy, on energy policy, on spending priorities - you have been a vigorous supporter of President Bush," he said.

Asked about running mates, both presidential candidates said Democrat Joseph Biden was qualified to become president, although McCain qualified his judgment by adding the words "in many respects."

McCain passed up a chance to say his own running mate, Alaska Gov. Sarah Palin, was qualified to sit in the Oval Office, though he praised her performance as governor.

Obama sidestepped when asked about Palin's qualifications to serve as president, and he, too, praised her advocacy for special needs children.

But he quickly sought to turn the issue to his advantage by noting McCain favors a spending freeze on government programs.

"I do want to just point out that autism, for example, or other special needs will require some additional funding if we're going to get serious in terms of research. ... And if we have an across-the-board spending freeze, we're not going to be able to do it," he said.

In addition to differences on taxes and spending, McCain said Obama advocated trade policies that recalled those of Herbert Hoover, who presided over the start of the Great Depression.

Obama has called for tougher provisions in trade negotiations, arguing that is necessary to avoid undercutting the wages paid American workers.

McCain also said Obama has aligned himself with "the extreme aspect of the pro-abortion movement in America" and had voted present while in the Illinois Legislature on a measure to ban one type of procedure late in a woman's pregnancy.

Obama said the bill would have undermined Roe v. Wade, the Supreme Court ruling that granted abortion rights, and had been opposed by the Illinois Medical Society.

"I am completely supportive of a ban on late-term abortions, partial-birth or otherwise, as long as there's an exception for the mother's health and life, and this did not contain that exception," he added.

McCain sarcastically paid tribute to "the eloquence of Senator Obama. He's (for) health for the mother. You know, that's been stretched by the pro-abortion movement in America to mean almost anything."

In Ohio on Sunday, Obama was approached by a man who said, "Your new tax plan's going to tax me more."

A video clip caught by Fox News shows Obama replying, "It's not that I want to punish your success. I just want to make sure that everybody who is behind you, that they've got a chance at success, too. And I think that when we spread the wealth around, it's good for everybody."

McCain referred repeatedly to that voter, Joe Wurzelbacher, a plumber from Toledo, Ohio.

After the debate, CBS News anchor Katie Couric talked with Wurzelbacher, who was repeatedly called "Joe The Plumber" by the candidates. He said the experience was "surreal."

"Surreal's a good word to use for it," Wurzelbacher said on the CBSNews.com Debate Webcast. "It was - you know, I was glad I was able to act as some type of point, you know, to where they could sit there and hammer out what they both think, what they want to say. But ultimately, you know, the important part was the debate." (Read more of Couric's interview with "Joe The Plumber")

Obama entered the debate with a wide lead over McCain nationally, a new CBS News/New York Times poll shows. The Obama-Biden ticket now leads the McCain-Palin ticket 53 percent to 39 percent among likely voters, a 14-point margin, according to the poll.