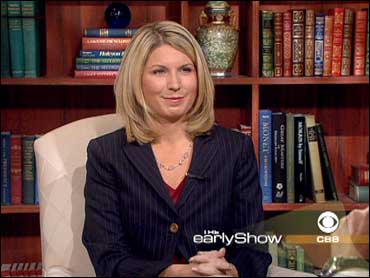 CBSNews.com: Taxes and the economy have been the main point of contention between the two candidates since Senator Obama became the nominee. More than 80 percent of the country is dissatisfied with the state of the economy. What is the fundamental difference between how President Bush has managed the economy and how Senator McCain would manage the economy?

Nicolle Wallace: Well, I think McCain has a decades-long record of calling for far greater fiscal discipline and for making some of those tough choices between spending and spending restraint. And I think that sets him apart from a lot of politicians, Democrats and Republicans. I think that's essential to his philosophy that the entire federal government needs fundamental, seismic reforms--to serve the people that it's there to serve in every capacity, not just in terms of the economy.

Even with those first Bush tax cuts. At the time that was a vote in favor of fiscal discipline, not against tax cuts. So I think there's a really big difference between these two.

CBSNews.com: Of course, at the time, Senator McCain argued against the 2001 and 2003 tax cuts not just because of spending cuts that he thought should happen--but because he thought they weren't fair enough. And he criticized the percentage that went to the wealthiest one percent. So what's changed between now and then?

CBSNews.com: But, as you know, the Democrats are trying to sell a narrative about McCain, which is that he used to be a maverick, he used to be independent. He opposed the Bush tax cuts both times, not just because of fiscal discipline but also because of fairness. And he essentially sold his soul to become the Republican nominee and is now running on the Bush economic policy. What's your response to that?

Nicolle Wallace: We should only be so lucky to have the Obama campaign be stupid enough to depict John McCain as a man who would sell his soul. I mean that's just offensive at every level. He's a man who spent years serving his country. He has a well documented record as a POW who let his fellow soldiers go before him.

That is an offensive political attack that I think the American people will reject, so I'm not even going to dignify it with a response. But I think that the voters and John McCain are both focused on the future, which is a choice between two candidates who have a very different view about the size of the tax burden on the American taxpayer. And I don't think that the voters will believe for a minute that John McCain is carrying anyone's water other than theirs.

His positions on taxes are rooted in what he thinks is the best thing for the American economy and the American people. And I think we welcome a robust debate, but I think what we will reject loudly is any effort to impugn the motives or what you described as selling one's soul. I just don't think that's true or fair at any level.

CBSNews.com: For the record, I didn't describe it that way. I was characterizing what some Democrats have said for your response.

Nicolle Wallace: I wasn't addressing you. I was addressing the Democrats that said that.

CBSNews.com: Your former boss, President Bush, expressed regret during his trip to Europe this week. He said he should have used "a different tone, a different rhetoric" so that people would see him as a man of peace. You were communications director at the White House. Looking back, what could have been done different about how the President communicated on the war?

Nicolle Wallace: I just saw those comments reported the same way you did. And I think that it's natural and positive and healthy that at this point, he's reflecting on a lot of aspects of his presidency. I think we're all kind of at that point where people are looking back. A lot of people in the media and Democrats are drawing very negative conclusions. Even some Republicans are, I guess.

But, without kind of seeing the whole context of that, I don't want to say too much more. I would say that President Bush has admitted mistakes, you know, big ones--at all levels--multiple times. I mean, this is going back to 2005. We talked about mistakes in the military strategy and adjustments that were made. Mistakes in the political strategy in Iraq and adjustments that had been made. And I think it's probably a natural extension of that reflection that he said what he said today. But I don't have any other insights there.

CBSNews.com: Does McCain believe Bush is a great president?

Nicolle Wallace: I don't know. That's a good question to put to him next time Katie gets an interview with him.

CBSNews.com: There's obviously been a lot of Republican criticism of that McCain event last Tuesday night, of the now infamous green backdrop, of McCain's presentation as he gave his speech, and the composition of the crowd, and pretty much everything about the room. How did that happen, and what has the campaign learned from the experience?

Nicolle Wallace: You know, having joined the McCain campaign late--just about six weeks ago, I can brag on them in a way that they can't do on themselves because I joined late. When you walk around the campaign headquarters, what is most stunning to me is just how lean it is. Everything looks like something you and I would have put in our college dorm room--like temporary furniture. They did not spend money they didn't have.

And if you know anyone that's stared down death, you know they have this inspirational kind of gratitude for just being here. And I think there's a little bit of a mentality that they were grappling with right after seizing the nomination where they did not want to spend more than they had. They did not want to ramp up too quickly.

There was this sense to start small and to build slowly. And I think what the media is seeing, and what you're talking about, are just some natural growing pains. And we are now in a position where when we made mistakes, we're under the full glare and scrutiny of the media spotlight, as we should be. But we obviously see what you see and we're making adjustments and we're making corrections.

CBSNews.com: Is there concern in the McCain campaign about the fairness of the mainstream media coverage going forward? Because the Clinton campaign certainly raised a lot of objections to the way Senator Obama was treated, in their view, by the media. Does the McCain campaign share those concerns?

Nicolle Wallace: We are focused on the future and I think we are going to observe very closely and be on the lookout for any disparities. I think John McCain has a decades-long record of being one of the most extraordinarily accessible and one of the most well-liked politicians in America among the public and among the media. He has a famous joke about the press being his base.

CBSNews.com: Is there any consideration being given to McCain making a one-term pledge?

Nicolle Wallace: No. Not that I'm aware of. I think that what people will look at in November are two very different candidates. Two men who, I think, represent the best of their parties at this moment, perhaps. Obviously, based on the votes cast by primary voters. And I think they'll make a choice based on big, wide gaping differences on the big policies we're facing.

CBSNews.com: Do you think Michelle Obama is a legitimate issue in the campaign?

Nicolle Wallace: What do you mean?

CBSNews.com: Will the McCain campaign be open to attacking what she has to say, or do you rule out making comments about what a candidate's spouse has to say?

Nicolle Wallace: I would look back among your records, but I believe our candidate has spoken clearly on that. This will be a debate between Barack Obama and John McCain and that would not be the case. But you should check that.

CBSNews.com: The Obama camp is very proud of the fact that soon they will have staff in all 50 states. Is that something that the McCain campaign hopes to match?

Nicolle Wallace: I think there are probably many different schools of thought about the political wisdom of staff in 50 states. I believe that we subscribe to something that will look different. But our political strategy will be one that's born of our view and our perspective of what it takes to win in November.

CBSNews.com: A couple of times this week, Senator McCain said he is not running for President Bush's third term but Senator Obama is running for Jimmy Carter's second. But you have to be in your forties, at least, to remember Jimmy Carter. So is there a concern that that attack is less relevant given how many voters don't particularly remember how President Carter performed in office?

Nicolle Wallace: Well, I think that there's a policy point being made. And I'll give the Obama campaign the benefit of the doubt and say that I think what they're trying to make is a policy argument there. We're making a policy argument when we talk about Jimmy Carter's second term. And I think that Barack Obama and Jimmy Carter should be proud to embody each other on many aspects of the policies they seek to advance.

Their national security vision is nearly identical. And their economic policies are most similar. I certainly think it would be illegitimate and wrong to say that he's running for an extension of Bill Clinton's presidency. So we went back to Jimmy Carter's policy vision to find a comparison or an analogy or something to help people understand what kind of America he envisions.

CBSNews.com: Why do you think he's so different from Bill Clinton?

Nicolle Wallace: Well, economists who are much smarter than me can tell you much, much more about this. But I think at his core, his economic vision was different from Obama's in that it favored pro-growth policies more. And, again, you have to talk to an economist to get into the nitty-gritty there. But I think the economic vision that most closely mirrors Obama's is Jimmy Carter's.

CBSNews.com: Early in the campaign, Senator McCain seemed to rule out naming somebody pro-choice to be his running mate. He spoke very frankly about how difficult that would be within his own party. And yet, lately, he's spoken favorably about Governor Ridge and Mayor Bloomberg. So what is his policy about naming somebody who's pro-choice?

Nicolle Wallace: We're not going to have anything to say about the vice presidential selection process or any of the people being considered until we announce our running mate.

CBSNews.com: Finally, let me ask you about the town halls. The first one is happening this week. Presumably, there will be an empty chair there for Senator Obama.

CBSNews.com: Do you think Obama really wants to do these forums or is he just talking about it?

Nicolle Wallace: You'd have to ask them. Everything I've seen and observed about his candidacy, at least the rhetoric, speaks to the deep desire of the American people to see politics done differently, done better. I don't know that there's any proposal on the table right now to accomplish that than Senator McCain's proposal for town halls.

CBSNews.com: And your campaigns have been in touch but no progress has been made on actually scheduling these?