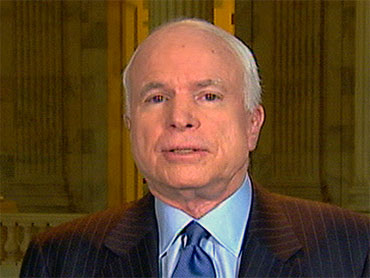 (CBS)
Sen. John McCain continued his lobby for a troop surge in Afghanistan as President Obama reconsiders his overall strategy for the region.

"It's not as tough as when the surge started in Iraq," McCain said today during an interview with NBC's David Gregory at The First Draft of History, a conference in Washington, D.C., produced by The Atlantic, the Newseum and The Aspen Institute.

"I am confident we can succeed if there are sufficient resources to do so. If we don't get sufficient manpower--men and women in uniform--then I think we could fail," he said.

McCain said that the strategy used in Iraq to clear and hold areas, and create an environment so that allowed citizens to return to normal life, could be applied to Afghanistan. "We could see signs of success in 18 months. If not we'll make a decision at that time," he said.

If the Congress and the president aren't willing to send more troops than the 68,000 currently deployed, McCain said he would rather get out of the Afghanistan.

McCain said that the people of Afghanistan don't support the Taliban, but noted that the American people are "very weary" and "understandably saddened by the tragic loss of life," and that corruption in Afghanistan presents obstacles to success.

"[President Hamid] Karzai is corrupt and we have to address that," McCain said. "Things were far worse in Iraq than in Afghanistan today -- we can't preserve our national security without dealing with Afghanistan."

On Wednesday, McCain said he would seek to have the top U.S. commander in Afghanistan, Gen. Stanley McCrystal, and Gen. David Petraeus, head of Central Command, to testify before Congress. In a confidential report delivered to the Obama administration, Gen. McChrystal said that additional troops are needed within the next year or else the conflict "will likely result in failure."

More from the "First Draft of History" Conference:
Lindsey Graham Hits Glenn Beck and Bill O'Reilly
Geithner: Goal is not to Save People From Mistakes
Petraeus: Afghanistan is not Iraq or Vietnam
Doctor: U.S. Needs to Control "Tsunami of Obesity"

Daniel Farber is the editor-in-chief of CBSNews.com.