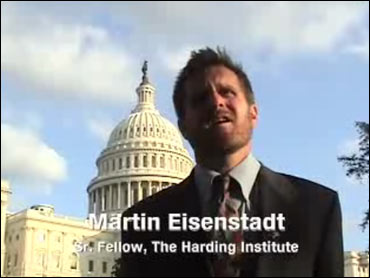 MSNBC was the victim of a hoax when it reported that an adviser to John McCain had identified himself as the source of an embarrassing story about former vice presidential candidate Sarah Palin, the network said Wednesday.

David Shuster, an anchor for the cable news network, said on air Monday that Martin Eisenstadt, a McCain policy adviser, had come forth and identified himself as the source of a Fox News Channel story saying Palin had mistakenly believed Africa was a country instead of a continent.

Eisenstadt identifies himself on a blog as a senior fellow at the Harding Institute for Freedom and Democracy. Yet neither he nor the institute exist; each is part of a hoax dreamed up by a filmmaker named Eitan Gorlin and his partner, Dan Mirvish, the New York Times reported Wednesday.

The Eisenstadt claim had mistakenly been delivered to Shuster by a producer and was used in a political discussion Monday afternoon, MSNBC said.

"The story was not properly vetted and should not have made air," said Jeremy Gaines, network spokesman. "We recognized the error almost immediately and ran a correction on air within minutes."

Gaines told the Times that someone in the network's newsroom had presumed the information solid because it was passed along in an e-mail from a colleague.

The hoax was limited to the identity of the source in the story about Palin - not the Fox News story itself. While Palin has denied that she mistook Africa for a country, the veracity of that report was not put in question by the revelation that Eisenstadt is a phony.

Eisenstadt's "work" had been quoted and debunked before. The Huffington Post said it had cited Eisenstadt in July on a story regarding the Hilton family and McCain.

Among the other victims were political blogs for the Los Angeles Times and The New Republic, each of which referenced false material from Eisenstadt's blog.

And in July, Jonathan Stein of Mother Jones magazine blogged an item about Eisenstadt speaking on Iraqi television about a casino in Baghdad's "Green Zone."

Stein later realized he'd been had.

"Kudos to the inventor of this whole thing," Stein wrote. "My only consolation is that if I had as much time on my hands as he clearly does, I probably would have figured this out and saved myself a fair amount of embarrassment."