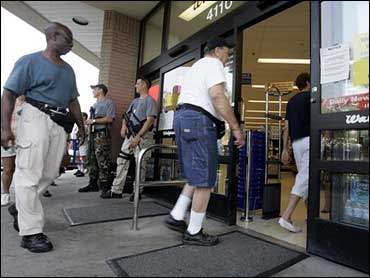 Residents began streaming back Monday as part of a plan by the mayor to reopen New Orleans one neighborhood at a time, despite repeated warnings from the top federal official on the scene — and President Bush himself — that the city is unsafe.

Mayor Ray Nagin, under mounting pressure to rescind his decision to let people in, defended the move and complained that the federal official in charge in New Orleans, Coast Guard Vice Adm. Thad Allen, had made himself "the new crowned federal mayor of New Orleans."

Around midday, however, Nagin spokeswoman Sally Foreman said the mayor was reassessing the timetable for bringing people back into the city because of "external factors," such as a tropical storm headed for the Gulf of Mexico.

The dispute (video report)
underscored the lack of coordination between federal and local officials that has marked the disaster practically from the start.

Over the next week, the Uptown neighborhood, the Garden District and the historic French Quarter are also set to reopen to residents and businesses at Nagin's invitation, bringing a total about one-third of New Orleans' half-million inhabitants back.

Allen told Hannah Storm of The Early Show that the decision to allow residents and businesses to return was not premised on the fact that "people will be here permanently and will need access to things like portable water or emergency evacuation and other infrastructure."

"We've done an assessment of things like sewer, portable water, telephone systems, 911 response and so forth," Allen said. "There is general concurrence among the folks that are working this problem that the conditions have been met for re-entry."

Algiers, a neighborhood of 57,000 people across the Mississippi River from the French Quarter, became the first section Monday to reopen to residents. Algiers, home to many of the companies that make floats for Mardi Gras parades, saw little damage from Hurricane Katrina three weeks ago. Unlike much of the rest of the city, it has electricity and drinkable water.

John Schwab, 31, came back to Algiers with his brother and encountered no checkpoint getting into the neighborhood, despite warnings from the mayor that police would be checking IDs. Schwab owns a janitorial service that had contracts with movie studios. But they have all pulled out of New Orleans because of the storm

"I'll probably have to look for a job in construction," he said. "That's about the only thing around."

A few gas stations and convenience stores were open, but little else. The manager of Winn Dixie supermarket said he had hoped to be open by Monday, but it took longer than he anticipated to clear out the spoiled food and other debris.

"We're now shooting for Thursday," said Grady Shavers. "Salvage crews already took everything out of the store. That was a nasty job."

Getting into the Big Easy hasn't been a breeze. It's been stop-and-go traffic across the main highway into New Orleans this morning as National Guard trucks and emergency vehicles are sharing the road with pickup trucks loaded with water, cleaning materials and coolers.

Returning residents are finding streets lined with trash bags and discarded refrigerators, their rotting food still inside. Stacks of mattresses and damaged furniture and other goods are piled at the curb for pickup. One returning business owner says his customers have moved away. He figures he'll have to look for construction jobs now, because, as he put it: "That's about the only thing around."

In Washington, Mr. Bush on Monday questioned the plan to let people back in, saying there is "deep concern" about the possibility that Tropical Storm Rita, which was headed toward the Florida Keys, could head into the Gulf of Mexico and drop more rain on New Orleans. He said he has been warned that the city's levees would be breached again if that happened.

In addition, Mr. Bush said there are significant environmental concerns. New Orleans still lacks drinkable water, and there are fears about the contamination in the remaining floodwaters and the muck left behind in drained areas of the city.

"The mayor — you know, he's got this dream about having a city up and running, and we share that dream," Mr. Bush said. "But we also want to be realistic about some of the hurdles and obstacles that we all confront in repopulating New Orleans."

Earlier, over the weekend, Allen warned that city services may not be able to handle the influx of people. He expressed concern that another storm could cause the patchwork repairs to New Orleans' levees to fail and bring another round of flooding.

He said hoped to meet with the mayor later Monday to discuss his concerns and work out a timetable for bringing the city back.

"Everybody wants the city of New Orleans to be restarted," Allen said Monday on CBS News' The Early Show. "The mayor has a vision. We agree with that vision. The discussion we're having with the mayor is over the timing of re-entry and how to do it safely."

Asked when it would be safe for people to return, he said, "We know potable water will probably be restored soon and the levees will be fixed, so that may mean days, weeks."

Nagin defended the decision to bring people back.

"If he's suggesting I'm pushing a little hard, I am. The citizens of New Orleans deserve the opportunity to see what they have left and what they can salvage," Nagin told Fox News in response to Allen's warnings.

"I'm a little surprised the admiral came out publicly on this," he added. "Maybe since I've been away a day or two, maybe he's the new crowned federal mayor of New Orleans."

About 20 percent of the city is still flooded, down from a high of about 80 percent, said Mitch Frazier, spokesman for the Army Corps of Engineers. The still-flooded areas are near Lake Pontchartrain where the levees broke and in eastern New Orleans. Frazier said all of the water is expected to be pumped out of the city by Sept 30.

With hurricane season still in full swing, he said, engineers are trying to repair the broken levees "to offer at least a baseline level of protection."

"There is not the hurricane protection here that there once was. It is significantly compromised. The hurricane level protection we have had here prior to Hurricane Katrina will not be able to return. It will be years, not months," he said.

On Monday morning, traffic was backed up severely along Interstate 10 west of New Orleans and was stop-and-go across the elevated portions of the highway that crosses Lake Pontchartrain. Tractor-trailers, emergency vehicles and National Guard trucks shared the highway with cars towing trailers full of hurricane gear and pickup trucks with their beds loaded with water, cleaning materials and coolers.

In the Uptown section, where the floodwaters left behind mud and other debris, residents were cleaning up, even though the neighborhood had not officially been reopened.

Refrigerators, strapped shut with rotting food still in them, lined some streets. Garbage bags, stacks of mattresses and box springs, furniture, clothing, toys and other goods were piled at the curb to be picked up.

In Algiers, Barry Kern, president of Mardi Gras float-maker Kern Studios, said he supports the mayor's plan to bring businesses and some residents back.

"Obviously we need to get businesses up and running any way we can," Kern said. "If we don't start somewhere, where do we start?"

He said that the city might be unfit for children, but that there are key businesses that need to be reopened, like his, so that people can start making money and the city can get back on its feet.

The vice president of the national hospital accreditation organization also cautioned against reopening parts of the city, saying several hospitals probably were damaged beyond repair, while others may try to rush back into business before conditions are safe.

"Essentially the health care infrastructure of New Orleans is gone — it no longer exists," said Joe Cappiello, who had just completed a three-day mission to the city for the Joint Commission on Accreditation of Healthcare Organizations.

Although the city has more than a dozen hospitals, none has resumed normal operations. Officials at Children's Hospital, which Nagin had hoped would be ready in time for the planned return of residents to the Uptown neighborhood, said they might need 10 more days to prepare.

The Garden District's Touro Infirmary, one of the city's largest hospitals, announced plans to reopen on Wednesday, when residents are due to start moving back there. That would make it the first hospital to reopen since the storm. Cleaning crews were busy Sunday carting out debris and readying the hospital.

Dr. Brobson Lutz, New Orleans' former health director and an assistant coroner for Orleans Parish, said the hospitals clearly will not be up to accreditation standards, but the city still needs them open as soon as possible.

"I don't believe the people in New Orleans or the doctors give a hoot whether they accredit our hospitals or not," Lutz said. "We need to have our emergency rooms open so that if people returning need emergency care for trauma or infections or other things, they can get it."

Crews still searched by boat for the dead. The state Department of Health and Hospitals said the death toll in Louisiana had risen to 646. The toll across the Gulf Coast was 883.