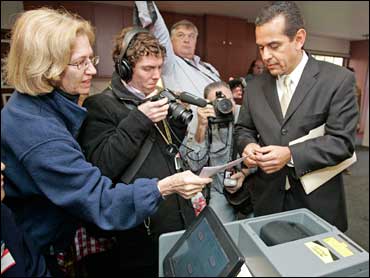 The mayor of Los Angeles easily won re-election after a bumpy first term in the nation's second-largest city, fueling speculation that he will be among contenders next year to succeed Gov. Arnold Schwarzenegger.

Mayor Antonio Villaraigosa, the first Hispanic mayor in more than a century, was rewarded Tuesday with a second, four-year trip to City Hall despite an uneven first term that saw the breakup of his marriage and the defeat of his signature plan to reform city schools.

"I stand before you all humbled tonight, humbled by your support and by your confidence," Villaraigosa told supporters at an election night rally.

Unofficial returns from all but one precinct and a tally of vote-by-mail ballots early Wednesday gave the Democratic mayor 56 percent of the vote. He needed to capture more than half the vote to avoid a May runoff.

Elsewhere in other election results, Cook County Commissioner Mike Quigley in Illinois bested a field of 11 other Democrats in a special primary election Tuesday to fill the seat of former U.S. Rep. Rahm Emanuel, who left Congress to be President Barack Obama's chief of staff.

Quigley, a Cook County commissioner since 1998, campaigned as a reformer and fiscal watchdog in the heavily Democratic district.

"After all we've been through in Illinois in the last six months or so this is really the first chance the voters have had to say 'Enough is enough, we're voting for change and reform,"' Quigley told supporters.

The Democratic nominee is the immediate favorite in the April 7 special election to finish out the two-year term Emanuel won in November.

In St. Louis on Tuesday, Mayor Francis Slay easily won the Democratic primary for a third term as mayor. The general election is April 7.

No Republicans ran for mayor, but Slay will face Libertarian Robb E. Cunningham, who ran unopposed, and Elston McCowan, who won the Green Party primary.

In Los Angeles, crime is going down and the charismatic Villaraigosa helped push through higher taxes to fund transit projects, but his tenure was slowed by the failure of his plan to take control of city schools and the disclosure of his long-running relationship with a TV newscaster. His wife filed for divorce.

The son of a Mexican immigrant, the 56-year-old mayor promised nothing less than to transform a city of nearly 4 million long divided by geography, wealth and color. But the city faces a possible $1 billion budget gap by 2010, traffic is considered the most congested in the nation and a one-in-three school dropout rate remains unchanged.

The contest attracted scant public attention. There were no debates. Villaraigosa built up a commanding advantage in money and TV advertising, all but eclipsing the field.

As he looks toward a possible run for governor in 2010, the mayor is not saying if he will serve his full term as mayor.

"I'm not going to make a promise I can't keep," he said in a recent interview.