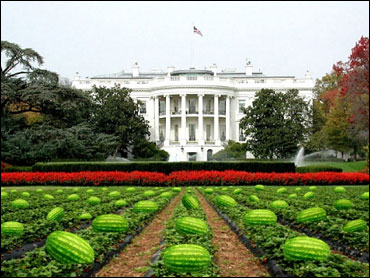 The mayor of Los Alamitos is coming under fire for an e-mail he sent out that depicts the White House lawn planted with watermelons, under the title "No Easter egg hunt this year."

Local businesswoman and city volunteer Keyanus Price, who is black, said Tuesday she received the e-mail from Mayor Dean Grose's personal account on Sunday and wants a public apology.

"I have had plenty of my share of chicken and watermelon and all those kinds of jokes," Price told The Associated Press. "I honestly don't even understand where he was coming from, sending this to me. As a black person receiving something like this from the city-freakin'-mayor - come on."

Grose confirmed to the AP that he sent the e-mail to Price and said he didn't mean to offend her. He said he was unaware of the racial stereotype that black people like watermelons.

He said he and Price are friends and serve together on a community youth board.

"Bottom line is, we laugh at things and I didn't see this in the same light that she did," Grose told the AP. "I'm sorry. It wasn't sent to offend her personally - or anyone - from the standpoint of the African-American race."

Grose, who became mayor in December, said he sent an apology e-mail to Price and her boss and also left her a voicemail apology.

Regardless, Price said it will be difficult for the two to work together.

Los Alamitos is a 2¼-square-mile Orange County city of around 12,000 people. The mayor is elected by fellow members of the five-seat City Council.