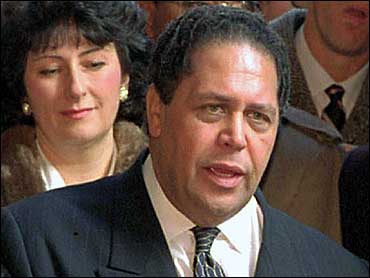 Martin Luther King Jr.'s widow said history will show Maynard Jackson was one of "the greatest American mayors ever" as mourners gathered Saturday to mark the passing of Atlanta's first black mayor.

Coretta Scott King was among those eulogizing Jackson at the funeral in Atlanta for Jackson, 65, who died last week of a heart attack after collapsing at a Washington-area airport. King called him an "incorruptible champion of the poor."

Best-known as Atlanta's first black mayor, he influenced urban politics long after his time in the mayor's office.

He later helped plan for its role as host of the 1996 Olympics.

Jackson was just 35 when he was elected Atlanta's first black mayor in 1973. With a booming voice and wide girth, he made his presence known immediately by taking on the predominantly white business leadership and demanding that doors be opened to blacks.

Jackson later acknowledged that he mishandled relationships with some individual business leaders. "This may sound naïve…but it never dawned on me that the question of the personal relationship was that important," he said.

He was re-elected to a second term in 1977, but he continued to have a stormy relationship with the business community. Jackson also had to lead the city through one of its darkest periods: the string of slayings of young blacks from 1979-81.

Still, when he left office after two terms, barred from seeking a third consecutive term, he could boast of many accomplishments, including the expansion of Hartsfield Atlanta International Airport and the opening of the city's rapid rail system.

Former Mayor Andrew Young credited Jackson for much of the city's growth.

"Without that airport and without the airport being built under a concept of affirmative action that included every one of our citizens, the growth that we've enjoyed across the board just wouldn't be there," Young told WSB-TV in a a telephone interview from Africa.

Jackson pursued a career as a bond attorney for eight years, during which time Young, the former U.N. ambassador and civil rights leader, was mayor.
Jackson then returned to seek a third term as mayor in 1989. He was elected with 80 percent of the vote and took office several months before the 1990 announcement that Atlanta had been chosen as host of the 1996 Summer Olympics.

"It is fitting and proper that Atlanta, not perfect but the best city in America, was chosen to host the Olympic Games," he said at the time.

Jackson was involved in the early planning for the Olympics, and in 1992 he went to Barcelona, Spain, to receive the Olympic flag for Atlanta at the close of that year's Summer Games.

In 1993, Jackson announced he would not seek a fourth term, "for necessary, unavoidable and compelling personal reasons and duties."

But Jackson influenced Atlanta politics long after he left office. His former city manager, Shirley Franklin, was elected as the city's first female mayor in 2001.

"No candidate for mayor in this city has tried to run without talking to Maynard first," said William Boone, a political science professor at Clark Atlanta University. "They want an endorsement, or at least try to keep him neutral."

Born in Dallas, Jackson grew up in Atlanta and graduated from Morehouse College at age 18. He later earned a law degree from North Carolina Central University.

Jackson lost to Sen. Herman Talmadge in the Democratic Senate primary in 1968, but the next year he was elected vice mayor and president of Atlanta's Board of Aldermen.

Jackson's third term was marred by a scandal at the airport, where Aviation Commissioner Ira Jackson — a Jackson appointee, but no relation — was accused of accepting bribes from airport businesses. Ira Jackson later resigned and was convicted.

After he stepped down, Jackson opened a financial services business, Jackson Securities. He also was chairman of Jackmont Hospitality Inc., a restaurant business.